I dunno… maybe it’s just the generally apocolyptic feeling of the time we’re living through.  Maybe it’s just ripples of the last big thing my “parents” did to me. (Will write about that soon, it’s a doozy…)

But this morning I was scrolling facebook and saw that Bill Gates has an op-ed in the Washinton Post titled, “Here’s How To Make Up For Lost Time On Covid-19.” Cool cool. Among other good recommendations that are highly unlikely to be listened to by our current “leadership,” Gates says the following about a vaccine:

To bring the disease to an end, we’ll need a safe and effective vaccine. If we do everything right, we could have one in less than 18 months — about the fastest a vaccine has ever been developed. But creating a vaccine is only half the battle. To protect Americans and people around the world, we’ll need to manufacture billions of doses. (Without a vaccine, developing countries are at even greater risk than wealthy ones, because it’s even harder for them to do physical distancing and shutdowns.)

First off, I am not nor ever have been an anti-vaxxer. I am a parent of a child on the Autism spectrum, and if you try and tell me death by measles is preferable to his life as it is, I will eat you and belch out the stench of your stupid, rotting bones. 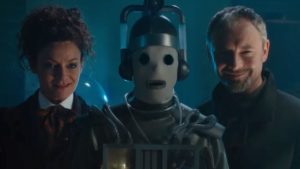 If Michelle Gomez is Involved, OK I’ll Do It

Nonetheless… Gate’s words sparked an image in my mind… of everyone in America lining up to get this vaccine at once. It made me think of scenes from Dr. Who when people are lining up to be “upgraded” by the Cybermen. Rather than mass panic, for the most part those people are pretty cluelessly complying, waiting in line with no idea what’s about to be done to them.

And just like that… all the “End Times” imagery I was fed back in the church, of people lining up to receive the “Mark of the Beast” and becoming slaves to the Antichrist came washing over me.

Gods forbid the current administration is still in charge 18 months from now. What’s to stop the man currently withholding supplies to states who’s governors haven’t been “appreciative” enough from tampering with the formula in someway? (Obviously not personally as he wouldn’t know what to do. But he could secretly have someone who does know what to do do it.)

And then I caught myself. Praise An Mórrígan I’ve come far enough to recognize my trauma speaking over logic. (BTW… when I credit Her it’s not in the “all credit goes to God” kinda way. It’s a shoutout to the entity that guided me as I slayed my own demons. I did the work, She directed and supported and pushed and prodded. Big difference.)

So… yeah. The old fear still has a bit of a toehold apparently. It shall be Exterminated. 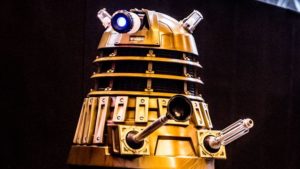 If you don’t get these references, for the love of all that’s good in this world go watch some Dr Who! And then for fun, since we’re almost all stuck at home (ISOLATE!!), tell me who your Favorite Doctor is in the comments. Mine is 12, with 10 coming in a close second. But Peter Capaldi embodied every Doctor who’d come before and his early dismissal made it harder for me to like Jodi Whittaker. I mean, yay, Girl Power. And she has had some good moments – but she’ll never “go all Scottish” on us.

Anyway, stay safe out there!