In 1977, the United States was poised to pass the Equal Rights Amendment to the Constitution, guaranteeing legal rights to all Americans regardless of sex. It had been passed by the House and Senate, had bipartisan support (including Presidents Nixon, Ford and Carter) and had been ratified by 35 of the 38 states required to solidify it’s place in our legal framework. 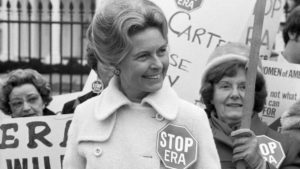 And then came Phyllis Schlafly.

Like a wrecking ball, Schlafly mobilized opposition to the ERA, Feminism, and ultimately moderate Republicanism itself. The coalition she put together during the mid-to-late ’70s was the very foundation of the Religious Right in America, and largely responsible for the Reagan Revolution.

Right now, the drama of the 1970’s is being played out every Wednesday on the Hulu series Mrs. America. With Cate Blanchett starring as the scheming-with-a-smile Schlafly (and a star-studded list of actresses playing her Feminist opponents), there was no doubt this would be good TV. And it is.

But Mrs. America goes deeper than that – especially for me. And especially today, as I’ve just finished episode 6 (titled “Jill”) – which left me feeling a bit punched in the gut. (Wait, what? There were Feminist Republicans?? Nixon supported the ERA?? Sexual favors were a job requirement for Congressional secretaries?? Republicans were Pro-Choice?? What alternate reality is this??)

Till now it had been a bit surreal seeing Blanchett’s Shlafly come up with all the anti-feminist talking points I used to parrot during my time as a Conservative Republican. Especially as I saw the passion and frustration portrayed by her opponents – women like Gloria Steinem, Betty Friedan, Shirley Chisholm, and Bella Abzug. Now that I’m on their side of the fence I can see why Schlafly’s arguments and movement took them by such surprise.

And also why, despite the deception inherent in those arguments, those ideas won out.

The Privilege And The Pedestal 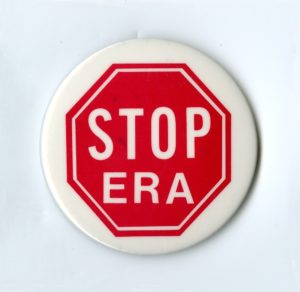 Schlafly based her opposition on the idea that making men and women equal under the law would, in fact, harm women. It would take away “privileges” she said women enjoyed –  including “dependent wife” benefits under Social Security, separate restrooms for males and females, and exemption from Selective Service (the military draft). She goes so far as to name her group STOP ERA (“Stop Taking Our Privileges”).

When I first joined the UPC, the biggest red flags I ignored had to do with gender roles and “submission” of women to their husbands. It didn’t mean, they told me, that I was a second-class citizen. It meant I was privileged. On a pedestal. To be cherished and protected by my man.

I tried, I really did. But I was always trying to reconcile this in my brain. I convinced myself that marriage was still a partnership, but instead of 50-50 maybe it was 51-49. But there were times decisions were made on my behalf that I vehemently disagreed with. And that is not a good feeling. (Fortunately the Hubs and I have both evolved into a much more respectful, equal partnership.)

But it kinda sounds good, doesn’t it? Especially to women who’ve been conditioned their whole lives to believe their worth is based upon being desired by a man. Cherished. Protected. Cared for. Who wouldn’t want that? At least, until you wake up and realize that your pedestal is really a gilded cage. IF you do ever wake up.

The Coalition That Ended The ERA Haunts Us To This Day

Episode 6 has Schlafly gaining ground in her opposition to the ERA. She’s becoming a national player, but she’s not quite powerful enough to get the Republican Party to remove it’s plank supporting the amendment in the 1976 Convention. Betty Ford is a vocal proponent of the amendment, and Schlafly goes so far as to picket the White House in protest of the First Lady of her own party.

But not enough women come to her protest, and time is running out. How, Schlafly wonders, can we swell our ranks? We have to find women who aren’t active in politics already and get them in this. And so the fateful decision is made to reach out to religious leaders of all denominations. The new interfaith group will be called the Eagle Forum.

The toughest group to get on board are conservative Catholic women (a group with over 15,000 on their all-important mailing list). The sticking point: their leader only cares about two things: abortion and homosexuality. Needless to say she’s opposed to both, and will only allow her group to merge with Eagle Forum if she is made Vice President, and these issues brought into focus.

And So It Begins 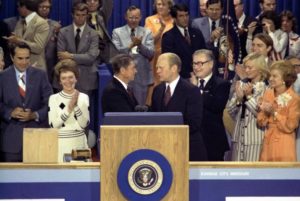 And so the Culture War we’ve been fighting ever since begins on the floor of the 1976 Republican convention. The episode ends with Schlafly in a closed-door meeting of delegates, where she’s told the pro-ERA plank will not be removed. But, there’s this guy named Jerry Falwell that you really need to meet. He’s interested in getting involved but doesn’t know what to do. “Well, I’m sure I can tell him a thing or two,” Schlafly purrs, smiling demurely while fire ignites in her eyes.

Four years later, the Eagle Forum, Jerry Falwell and his “silent majority” were essential components of the “Reagan Revolution.” We’re still fighting over abortion and gay rights to this day. 40 years of “trickle down” economics have left us with the largest wealth inequality since the Gilded Age, possibly even more.

And it all began with a woman from St. Louis who claimed she wanted the “freedom and right” to be a wife and mother for all women. A woman who was anything but a stay-at-home mom.

If you really want to understand the foundations of how we got here, Mrs. America is a must-watch. Currently streaming on Hulu, or available for purchase on Amazon Prime. New episodes are added every Wednesday.

4 thoughts on “Review: Mrs. America, Phyllis Schlafly and the ERA”