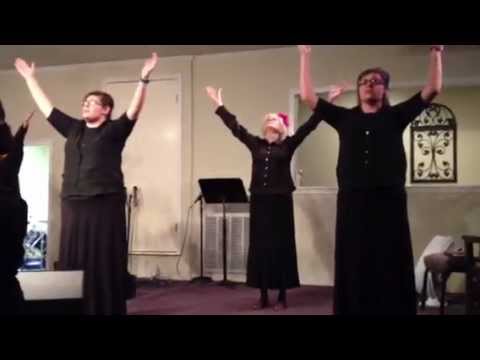 When I joined the United Pentecostal Church, I was young. I had lost members of my family and in my grief was looking for something concrete. The services were exciting and the people warm and friendly. I jumped in with both feet, and before long was worshiping exuberantly and speaking in tongues like everyone else.

There were red flags early on, but I was too excited to pay attention to them.

At the time I joined the national organization (the UPCI) was in the middle of a debate about whether or not it was OK for members to have television sets in their homes. This was 1993. It was time for the annual General Conference (where all the licensed ministers get together to vote on the rules and governance of the international organization) and a contingent wanted to lift the TV ban.

They failed, of course, and the rule stuck. If you were the head of your household, you were not allowed to own a television set. If not, you were expected just not to watch it.

Women Have Their Place

Early on, I went to a small meeting on a Saturday morning where the pastor spoke to a handful of us before we went out to “evangelize.” Some were going to visit nursing homes or hospitals or members who were shut in, some were going to touch base with kids who rode the church bus to Sunday School. I don’t remember everything that was mentioned that morning, but one thing stands out all these years later: The pastor said that what was really wrong with the brand new Clinton administration was the fact that they put so many women into positions of leadership.

Women simply are not supposed to be leaders over men, he insisted. This bothered me, but I overrode it.

Everyone But Us Is Going To Hell

Meanwhile I was learning that everyone in my family – all of whom had been “saved” according to most versions of Christianity – were in fact “lost” according to the UPC doctrine. I learned that not only did I have to believe on Jesus, but I had to follow a 3- step plan of salvation:

1 – repent of your sins (be sorry and ask for forgiveness)

3- receive the “gift of the holy ghost” with the evidence of speaking in tongues – this is an ecstatic state in which you speak words/ syllables you do not understand in an automatic way.

Even after you fulfill this 3-step plan of salvation, you can mess up and lose your salvation at any time. Basically, you have to pray and repent on a daily basis to remain in good standing. Because you never know when the Rapture might catch you off guard, or you could just up and die. You can’t ever slack up, not even for a day. That ONE DAY could be the one that lands you in Hell for all eternity!!

As you might imagine, this caused quite a bit of friction in my family. Friction that I regret to this day.

So let’s recap: So far, TVs are not allowed in your home, women in leadership is wrong, all of Christendom has salvation wrong and is going to Hell, and you might too if you don’t stay on your toes. 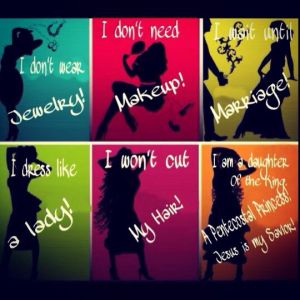 All of the above red flags were overshadowed by the whole “baptism of the holy ghost” experience. There’s no denying, it feels REALLY good. I was enjoying that, making new friends and generally loving this new experience. So far.

Now that I was pretty well “in,” it was time to address some real important aspects of my salvation. As a woman, my appearance really mattered to god. Apparently, 2,000 years ago when everyone pretty much wore loose flowing robes it mattered that men and women wore DIFFERENT loose flowing robes. And even though pants really hadn’t been invented yet, when they were they were the exclusive province of MEN. For me as a woman to wear pants was not just a sin, but an ABOMINATION to god.

So ok. Dresses and skirts. No pants. While we’re at it, those skirts need to be at least to your knees – “if your knees show when you sit down, your skirt is too short!” the pastor would say. Sleeves need to come to the elbow. And don’t even think about showing cleavage. You might draw the eye of some otherwise-righteous Brother and tempt him to sin. (Because that would be your fault, not the Bro with the wandering eye!).

I had very little money at the time, but nonetheless began revamping my wardrobe.

Submission On Your Head

Then I discovered that my hair was significant to my salvation as well. It was to remain uncut as a sign of my submission to god, and if I cut it I was in a state of rebellion. Even a little trim. “If you’re gonna trim it, you might as well shave it!” said the older lady who was in charge of advising me on these things. So, split ends or no, my hair was not to be cut. To do so while I was single would dishonor my pastor. Once I was married, it would dishonor my husband AND remove god’s hand of protection from my family.

So, yeah: if a woman trims her hair, god will not protect her children. That sounds reasonable, just and loving, doesn’t it?? Also, notice how the woman is responsible (again) for the honor of the MAN – either her husband or her pastor. And the safety of her children. Those poor men – they’re the only ones fit to be leaders, yet they are helpless in the face of rebellious women. So they’re in charge, but if they screw up it’s not their fault. Nice huh?

Next up, we tackled makeup. Did you know, for example, that pretty much all the makeup you wear is designed to mimic the physiological reactions on a womans face when she has an orgasm? Yes, it’s true. Blush = flushed cheeks. Lipstick = red and swollen lips. Eye shadow/ liner/ mascara is to mimic the way her pupils will dilate when aroused and/ or when she comes.

Therefore, ladies, putting that paint on your face is akin to throwing your sexuality in the face of those otherwise-righteous men in the church and leading them into temptation! (And again, it’s not the responsibility of the MAN with the dirty thoughts, it’s the fault of the woman for being too tempting.)

This was a hard one for me. I have allergies, and all my life have had dark circles around my eyes. They’re known as allergenic shiners, and I’ve always been super self conscious about them. When my allergies are acting up it can look like I have a horrible case of the flu, or that I’ve been punched. But even covering up those circles was a sin! Eventually I gave it up, but my self confidence suffered for years because I was convinced I looked like death warmed over.

The last big thing I had to give up was all jewelry. Pentecostal women are allowed to wear a watch, a wedding ring (in some churches) and brooches on her clothing (again in some churches.) This wasn’t AS big a deal to me, but it was for my mother. She’d just bought me several pieces of jewelry for Christmas – right before I stopped wearing it all together.

I should have been able to look at all of these clues and realize that I was getting myself into a cult, plain and simple. One that did not respect women, but expected them to be meek and quiet and submissive. My family tried to tell me this, but of course that only made me more stubborn.

And again, I was only 21 years old and not the most confident person to start with.

So I ignored all of these red flags and before I knew it was completely immersed into this new culture – I had become a member of the cult.

2 thoughts on “Red Flags I Ignored”