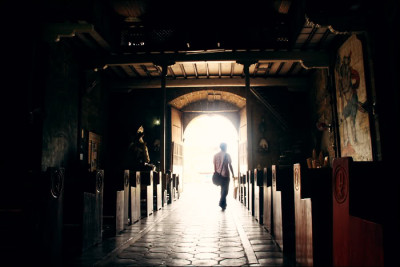 Christianity is losing members, according to Pew Research.

The foundation released polling data completed in 2014 that shows a 7.8 percentage point drop in the number of Americans identifying themselves as Christians since 2007. According to the survey, the sharpest decline was among mainline Protestants and Catholics – the denominations considered less Fundamentalist. Each of those traditions declined by 3 percentage points each, while Evangelical Christians (the more Fundamentalist  types) dropped by about 1 percentage point.

So what could be driving the more open-minded types away from Christianity? Could it be that the antics of the right-wing conservative Christians are driving them away? Maybe cooler heads just don’t want to be associated with a group known for intolerance (this and this )  and judgement more than love.

Maybe it’s because of the way women are treated – robbed of our power, told normal urges are demonic or career aspirations are from Satan, or blamed for the downfall of society for what we wear.

Could it be they’re tired of the general paranoia exhibited by the “war on Christianity,” the idea only they are allowed to pray in public, or other general batshit craziness?

Where Are The Christians Going?

So where do people go when they leave the Christian faith? According to the survey, most are just becoming “unaffiliated.” Those describing themselves as atheist, agnostic or “nothing in particular” have jumped more than six points, from 16.1% to 22.8%.

“Nothing in particular” has the largest percentage, and the largest growth, jumping 3.7 percentage points from 12.1% to 15.8% in the last 7 years. I personally wonder how many of them should be considered part of the “other religions” category as many are probably of the “spiritual but not religious” variety that follow a path of their own choosing. Instead, they’re lumped with Atheists and Agnostics, which in my humble opinion skews the numbers. There’s a big difference between “I believe in something that doesn’t fit in any particular religion” and “I doubt the existence of any type of god or higher power.”

Is that a bias on the part of Pew? I don’t think so. I think it’s more likely a general misunderstanding of the fluid nature of non-traditional spirituality.

What Can Christianity Do To Stop The Bleeding?

Speaking as someone who has left the faith, I think I can offer some perspective. Not that it will be heeded in any way.

There are a lot of sincere, sweet Christians who truly just want to love their neighbors and be kind and compassionate and follow the example Jesus set. They don’t want to beat everyone else over the head with a Bible, they don’t want to make gays feel hated or women feel like second class citizens.

Somehow, those people need to become more visible. The right wing has become the public face of Christianity in America and it’s turning everyone else away from what could be a positive spiritual experience. The more America turns away from the ultra-right wing Fundamentalist brand of Christianity, the more those people panic. And the louder they get. It’s a tall order, but somehow the world needs to see a version of Christianity that actually lives up to its name.

Good luck with that.