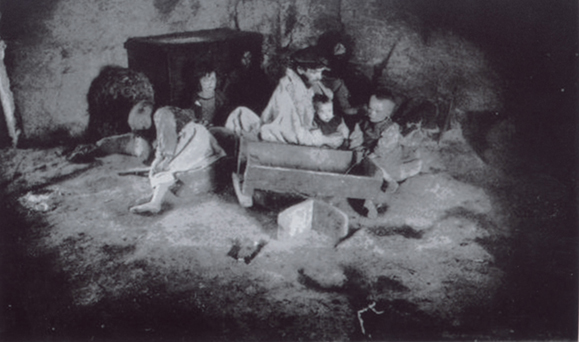 An Irish family during the Great Famine

In the southwest of Ireland, midway between Galway and Limerick, a mother and father are worriedly tending their sick daughter. Tenant farmers in the time of Famine, most of the family was starving. They’d likely be evicted when the rent next came due.

But none of that was as urgent as what was happening to their sweet little Mary. She was burning up with fever, and none of the usual remedies had had any effect on the illness. Worst of all, her breathing was getting shallow, and her face pale.

If nothing was done, death would come soon for their beautiful little girl.

“What’ll it be?” the mother finally said. “Are we to call on Father Dore, or …?” her voice trailed off as she looked plaintively at her husband.

The husband sighed. “If’n it’s Biddy Early you’re wantin’ to call on, best get to it. If we see Father first she’ll know, and she might just refuse us. But you’ll be the one to go.”

“You’d send me out alone, in the middle of the night?” the wife demanded.

“If it’s me what goes,” the husband replied, “Father’ll be askin’ ye at confession. Then he’ll refuse to give ye absolution. If ye go yourself, maybe it’ll be he won’t ask direct. An’ if he does, he’ll have more compassion on a desperate woman than he will a man.”

The mother nodded in agreement. She had to help poor Mary, even if it cost her very soul.

“What’ve we got to give her?” she asked. The husband sighed, and went over to the bare shelves in the single-room cottage. He pulled down the only jar, and held it out to his wife.

The wife took the jar, and covered herself best she could in a ratty shawl and scarf. She was more concerned with not being recognized than with keeping warm. She kissed Mary’s burning forehead one last time, and headed out into the night.

The path to Biddy Early’s Cottage

It was well past midnight before she reached the cottage, but the lamp was still burning inside. She pulled the shawl tightly around her and took a deep breath to calm her nerves. The door opened before she could knock, and a small, fierce-looking woman with red hair stood looking her over.

“Sarah Finney,” Biddy Early said, although the women had never met before. “You got here just in time, and well you chose, coming here an’ not the priest. Another hour and your Mary’d have been dead. Come inside and have some bread while I fix ‘er up a cure.”

Sarah stumbled into the warm cottage, and gratefully took the bread and jam she was offered. She was taken aback by how much Biddy knew, but sure she couldn’t remember when she’d last eaten. The cottage was simple, but one thing it did have was plenty of food. By the time she left, with her small bottle and strict instructions for her journey home and use of the cure, her belly was full and her heart soothed.

In the days that followed, Mary improved exactly as Biddy Early had predicted. The Finney’s were so relieved that they barely even bothered when the milk cow gave birth to a stillborn calf.

Who Was Biddy Early?

She’s the very archetype of the “wise woman,” a healer with Otherworld knowledge and connections. In Appalachian tradition we call them “Granny Women,” and I have a few in my various lines. But none so powerful as Biddy Early.

She was born just before the turn of the 19th century. Baptized Bridget Connors, she always went by her mother’s maiden name despite at least 4 marriages. The senior Ms. Early was also reputed to have healing powers, and to have taught certain cures to Biddy as a child.

Even as a little girl, it’s said that Biddy spent much of her time under or around a hawthorn bush conversing with the “Other Crowd.” Her parents died when she was a teen, and it could be said that the “Other Crowd” were her only constant, life-long family. Crowds, friends, and even husbands came and went, but Biddy Early always had what she called “my people.”

Biddy’s Relationship With The “Good Neighbors.”

Most of what we know of Biddy Early today comes from the accounts of people who lived in the same area. She’s passed into the realm of folklore, and so many of the accounts that have been recorded have contradictions on this detail or that.

But one thing is beyond dispute: her power came from the Irish Sidhe (pron. “shee”) – what many today call faeries. But hear this loud and clear: Tinkerbell does not live in Ireland. There’s a reason people only speak of Themselves via euphemisms, and when you dive into the original sources on Biddy Early you begin to see why.

As in the story above (which is fictionalized though all details come from real reports), often the cure worked as promised, but before long the family would lose something else. Biddy may have thwarted the Others from taking what they wanted, but They’d take something just the same. 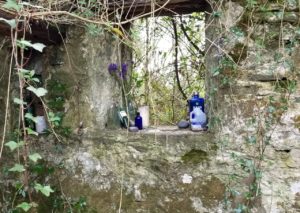 Inside the remains of Biddy Early’s cottage today

You see, healing always comes with a cost. At the very least, Biddy Early’s cures came with meticulous instructions that had to be followed to the letter. The slightest deviation and your visit to her was all for naught.

Often enough, Biddy herself paid a steep price. If the Others had marked a certain person to be “taken,” and Biddy thwarted Them with a cure, many reports say she’d be beaten in the night by unseen forces.

All the while, she stood her ground and continued to cure those who came to her for help. But unlike the local priests, Biddy Early would take no payment for her cures – this having been a condition laid down when she received her powers in the form of a mysterious blue bottle.

Instead, she was allowed to receive voluntary gifts of food, animals and of course copious amounts of alcohol. She may never have gotten rich, but she never went hungry during a time when over 1 million of her fellow Irish died of starvation.

What Biddy Early Has To Teach Us Today 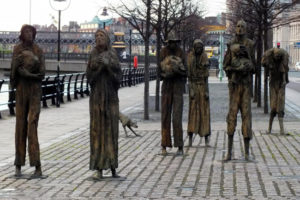 Biddy Early understood trauma. She lived and breathed it on a daily basis – either from the suffering of those who came to her for cures, through the loss of four husbands and at least one child, or especially from living through the catastrophe that was Ireland’s Great Famine. According to a story related in one of the few books about Biddy:

But there did several people then – women – come the time o’ the Famine. They’d be trying to get a bit to eat or trying to get into the poorhouse. They’d be tramping the roads an’ the child’d die in their arms with the cold. An’ they’d dig a hole in the road with their hands an’ bury the child.

So one of the first lessons Biddy Early has to teach us is that we can’t just sweep trauma under the rug. She knew and remembered every dead child, and refused to let people move the bodies to somewhere they could be more easily forgotten.

There are reports of Biddy refusing to heal people that came to her. Sometimes because they’d gone to the local priest first, or had said something disparaging about her before arriving on her doorstep. Then again, sometimes she’d call the person out for these trespasses and give a cure anyway. Still other times, she’d give explicit instructions – perhaps to get the cure to the person by sundown, or to speak to no one on the way home. When these instructions were disobeyed, the cure was useless.

The door to Biddy Early’s cottage. Could you walk through?

Because some people don’t want to heal. Of course, they think they do. Maybe they go from one therapist to another, or try different religions or “self-help” strategies. But the bottom line is they don’t want to do the work it takes – to pay the price – to truly heal.

Healing from trauma takes work. It takes facing what happened to you, and sitting with your emotions instead of avoiding them. It takes learning new ways of thinking, of literally re-programming your brain. It takes time, energy, and work. And it can be painful as Hell – especially since it’s often two steps forward, one step back. Not everyone is ready to do that. Some never will be in this life.

My Personal Experience With Biddy Early

My first experience with Biddy Early was through a Patreon post by Lora O’Brien, who visits sacred sites in Ireland each month and reports on them for her Patrons. She’d visited Biddy’s cottage, and included a guided journey meditation that took you to the cottage to “meet” Biddy.

I visited the cottage myself in April when I was in Ireland – the pictures of it here are all from that day. I spoke to her – although I got no response at the time – and left her a bottle of wine to thank her for the advice I’d gotten on the guided journey. What’s left of the cottage is full of offerings and items left behind by pilgrims like me.

Before writing this article, I took the guided journey again to ask Biddy what she wanted me to say about her. I’d just finished reading Edmund Lenihan’s book, quoted above, which gave me a fantastic sense of the person behind the legend. Lenihan reports that at the end of her life, the crowds that surrounded Biddy had all disappeared, and she spent her last few weeks in the company of only a couple friends. Likewise these few were the only ones to attend her funeral. It seems tragic – the woman who helped so many dying alone and in poverty, buried in an unmarked grave.

But here are the notes from my guided journey. The personality that came through sounds a lot like the one portrayed in Lenihan’s book – but of course this is just my personal experience. Take it for what you will.

The Fey were the only family she had ALL her life. Just like family, they didn’t always see eye to eye.

You gotta stand up. You gotta give as good as you get.

Spit on your pity. Don’t dare pity. I never went hungry when the whole country was dyin’ around me.

Stand your ground. don’t let people walk on you. A healer is a shield. I did better’n bein’ rich. I took care o’ my people.

Have an open hand. Energy flows through. Conduit. You’ll get what you need. Be tough but not bitter. Give all you can but don’t take no disrespect neither.

I’ll leave her words (or possibly my mind’s idea of her words, depending on what you believe) for you to interpret. I know what they mean for me. I’d love to hear your thoughts in the comments.

Here are the rest of the pictures from my visit:

Biddy Early’s Cottage, chimney view. To the rear left is a pile of debris that could be the famous shed Biddy used to speak with the Good Neighbors