This week, previously unknown monuments have been discovered near Newgrange.

The discovery was made by Anthony Murphy of Mythical Ireland – the same Anthony Murphy who was kind enough to be my tour guide to the monuments of the Boyne Valley during my trip to Ireland.

Which made me realize I’ve never finished writing about my trip, including my day with Anthony and our time at Newgrange.

So settle in. Let’s talk about Newgrange.

Síd in Broga- The Palace On The Boyne

Newgrange is the most famous monument in a valley full of Neolithic monuments.

The Bend Of The Boyne River

The Boyne Valley, just northwest of Dublin, was clearly the sacred heart of this part of Ireland 5,000 years ago. In particular, a bend in the River here seems to cradle an extensive complex of Stone Age monuments.

While Newgrange seems to have been the ceremonial center, Knowth – just down the road – is a larger complex of multiple burial mounds.

The Main Mound at Knowth

Some of the satellite mounds at Knowth

Both sites date from about 3200 BCE. Knowth is not only a larger complex, the giant kerbstones surrounding the main mound contain much more carvings and artwork than Newgrange – all with astronomical significance, as Anthony explained that day.

Neolithic Art on Kerbstone at Knowth

Still, it’s Newgrange that gets all the glory. Many of Ireland’s neolithic monuments have complex astronomical alignments, where the sun, moon, or even certain stars, shine into the entrances on a solstice or equinox.

But Newgrange is famous for its dramatic winter solstice alignment – where sunrise after the longest night of the year shines a beam of light directly into the passage, illuminating the chamber inside for a few brief minutes.

In mythology it was known as “The Palace on the Boyne,” home of the Great God Dagda and the place where both His son Aengus Og and the great Ulster hero Cú Chulainn were conceived.

Whatever the reason, there is truly something special about Newgrange. Going inside, I could feel the energy. It was an indescribable feeling, standing inside a chamber that is 5,000 years old. It’s made completely with stone, and the corbelled roof has kept the inside dry that entire time.

Unfortunately, no photos are allowed to be taken inside. But The History Channel filmed a short video segment, featuring none other than Mr. Anthony Murphy:

The chamber is cruciform, with three recesses, at the top and each side of the “cross.” Anthony speculates in his book, Newgrange: Monument to Immortality that the shape is meant to reflect the constellation cygnus.

Each recess contains a large stone basin, which contained human cremation remains and bone fragments when the chamber was first excavated.

You can only access the inside via an official tour run by Ireland’s Office of Public Works. But even the dry civil service tour – which leaves out so much that makes this site special – can’t dampen the vitality and living energy the monument gives.

If you ever get the chance to visit Newgrange, I highly recommend hiring Anthony Murphy as your guide. Assuming he doesn’t become overbooked by his newfound fame (more on that below.)

Besides giving you all the information the OPW guides leave out, Anthony is passionate beyond measure about the Boyne monuments, and Newgrange in particular. And his passion makes the experience.

After a full day spent exploring neolithic sites, we returned to Newgrange for sunset. The official tours were over for the day, and it sat as it has for 5 millennia – alone and empty (of living humans at least) on the top of its hill.

You can get pretty close, as you can see. Anthony and I hung out on the little road that runs in front, separated from the monument grounds by a hedge (with barbed wire inside to prevent trespassers) and watched the latest in a series of 5,000 years of sunsets.

Newgrange standing alone (of living humans, at least) as darkness descends on the Boyne Valley

Even at this distance you could feel the hum of energy from this place. It was truly one of the most magical moments of my life.

After all of that, I was tickled purple to find that Anthony was responsible for discovering completely new monuments in the area this week: 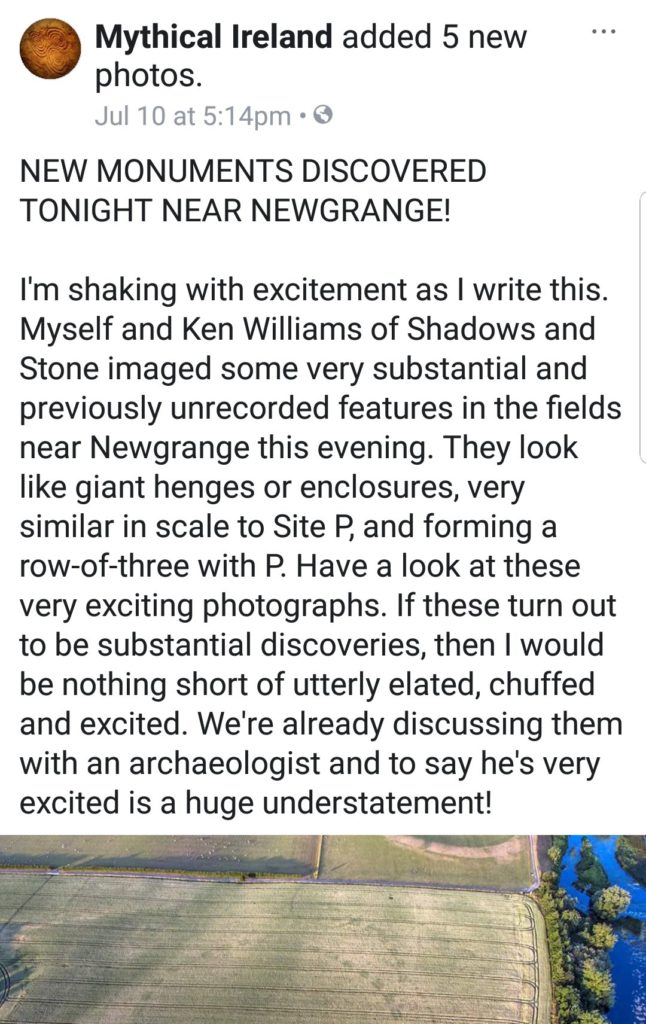 Since that first announcement, the news has spread like wildfire, and Anthony has deservedly had several days in the spotlight.

Here’s his appearance on the Irish national news:

Lest this post begin to sound like a Murphy fan page, we now turn our attention to the other big news around Newgrange.

Excavations are underway at the monument for the first time since the 1980’s – and there are some big expectations for what will be found.

As it currently stands, you enter the site at a small building that used to be the tourist office. In 2015, a geophysical survey was conducted to see if it was safe to renovate that building. Instead, the survey revealed, “the most definite, complex, and ordered feature ever seen in a geophysical survey in Ireland,” according to archaeologist Matthew Stout.

The survey found two rows of large pits – perhaps post-holes – that seem to form the ceremonial procession to the entrance of the site. The pathway or corridor ends precisely due south of the entrance.

I’ll talk about this a bit more when I write about my visit to the Royal/ Ceremonial site at Rathcroghan in the Connacht province. There, I learned that every province has a site similar to Newgrange – even the province of Meath, which was formerly the center province of the island and includes the ceremonial site of Uisneach, where I attended this year’s Bealtine fire.

But it’s possible that each site had a ceremonial procession way, and that there were special plank roadways leading from each one to the central site at Uisneach.

Ireland has well earned it’s reputation as a magical isle. It seems nearly everywhere your foot falls there are connections to the ancient past. Even with all the discoveries being made at the moment, we’ll never know the extent of Eire’s secrets.