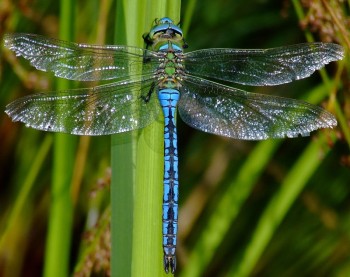 I’ve been collecting dragonflies for years. A decade really.

Way back, in the middle of my time in the UPC I went to a Women’s Retreat. The speaker suggested that we all collect something that has meaning to us. I can’t remember why now. But I had gotten a lot out of that retreat and her messages, so I decided to follow this advice. I looked around – I thought about butterflies, but everyone collects butterflies. They’re everywhere. Too easy.

Then in one of the shops at the hotel we were staying at (Actually it was Heritage USA, the place formerly owned by Jim & Tammy Faye Bakker. Someone else owned it then and had a retreat center there. Between the conference areas and the hotel area was an indoor mall area. Gotta suck up those dollars every way possible!) I found a dragonfly. It said that dragonflies are a symbol of new beginnings and I liked that. I figured I was always screwing up and needing a new beginning in God. So it was settled. Dragonflies were mine.

Little did I know at the time the significance of that decision. For a good decade now I’ve collected dragonflies – I have tons of dragonfly pins (one of the few jewelry items I was allowed to wear in the UPC), figurines all over my house, images, etc. They felt meaningful to me even back then, and even moreso now.

I’d never heard of totem animals before beginning this path. It’s an idea that originates with indigenous tribes the world over, but especially with Native American tribes. The website Legends Of America has a great explanation:

A totem can be the symbol of a tribe, clan, family or individual. Native American tradition provides that each individual is connected with nine different animals that will accompany each person through life, acting as guides. Different animal guides come in and out of our lives depending on the direction that we are headed and the tasks that need to be completed along our journey.

Native beliefs further explain that a totem animal is one that is with you for life, both in the physical and spiritual world. Though people may identify with different animal guides throughout their lifetimes, it is this one totem animal that acts as the main guardian spirit.

With this one animal a connection is shared, either through interest in the animal, characteristics, dreams, or other interaction.

This Animal Guide offers power and wisdom to the individual when they “communicate” with it, conveying their respect and trust. This does not necessarily mean that you actually pet or spend time with this animal, more that you are open to learning its lessons.

For some, knowing what is their totem animal is almost an innate process. It’s as if they’ve always known, inexplicably drawn to the animal or having a special feeling for the animal’s energy. For others, they wonder how to tell what their animal totem is.

For me, I have been drawn to dragonflies since I spotted the figurine in the gift shop that day. Immediately it felt RIGHT that this was for me. I’ve had other animals temporarily make an impact on my life, but dragonflies resonate with my soul in a whole different way.

The Meaning of A Dragonfly Totem

The following is from my journal, dated 11/4/14. It’s the day I did research on the symbolism and meaning of dragonflies as a totem. Word for word, here’s what I discovered:

Awesome information about dragonflies and what they symbolize. It is most definitely meant to be my totem animal.

Dragonfly is master of illusion and the mystical realm of color, whose wings reflect and refract the power of light. They begin lives in water, transform and grown to become shaman creatures of the air. Swift fliers with brilliant control and darting speed, they are miniature dragons of the faerie realm. Associated with both emotion & passion (water) AND mental clarity and control (air).

A symbol of transformative change & represents creative imagination and the insight of clear vision throughout our illusions.

In almost every part of the world symbolizes change in perspective of self realization. Mental and emotional maturity, deeper meaning of life.

Flight across water = going beyond the surface looking into deeper implications and aspects of life.

Moves in all 6 directions – agile. Wings only beat 30x per minute = power and simplicity and effectiveness.

**Defeat of self created illusions. **

Iridescence on wings and body shows different colors depending on angle and light. Symbolizes end of self created illusions and clear vision into realities of life. Magical property of iridescence = discovering of ones own abilities by unmasking real self and removing doubts one casts on own sense of identity.

Eyes = 360° vision. Uninhibited vision of mind and ability to see beyond limitations of human self.

At the time I wrote that I was just beginning to explore this path, and it really spoke to me. The idea of removing the doubts about my own identity and who I truly am – regardless of what anyone else wants me to be.

As I look back on it now, I’ve come a long way in only 4 months. I’ve stopped hiding a LOT of who I am. I’m not all the way there yet – most of my family doesn’t yet know about this path. (My husband works overseas and we communicate mostly via text. He’s still fully involved in the UPC so I can just imagine how this will go over! As my bestie said, “he’s gonna die twice!” But… I’ve lived for 20 years trying to be what he wanted. That is the topic of another post for another day… )

How about you? What’s your totem animal? Do you know? What has it taught you? I’d love to hear about it in the comments below!