After coming home from the Women’s March, I reached the point where depression and anxiety made it impossible to do more than put one foot in front of the other each day. I did plant a garden – but that’s been about the only productive thing I’ve done in 2017.

All the traumas of the past year or so have taken their toll. And as I sat inside my four walls, shutting myself off from the world and the constant stream of negative political news, I began to feel an urge to go to the beach.

I’ve never been a beach person. I’ve always preferred the mountains. I thought this urge was because of a meditation journey technique my teacher, Lora O’Brien uses that pictures the beach as the in-between place between this world and the Other. I thought an actual visit would help me visualize more strongly during the meditation. I kept thinking of going, but never went.

Suddenly last week, I had to go NOW.

There’s no other way to explain it. I just knew I had to get off my ass and get to the ocean. So I did.

Signs That This Was No Ordinary Beach Trip 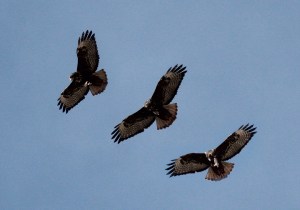 I spoke to The Morrigan about it on the way, dedicated the trip to Her and asked for protection. Just as I had on the drive to Washington for the March, I immediately began to see an unusual number of hawks. Like a crazy high number. Hawks aren’t really associated with Her in the lore, but they seem to have significance for me.

Since this was my first trip to the beach as a Pagan (I rarely go there, even though it’s only a couple hours away) I decided it would be a good idea to make some sort of offering to Manannan Mac Lir, the Irish God of the Sea. Once I got checked into my hotel and walked out onto the beach for a bit, I walked down toward the area of the little town with some shops. Most were closed as it was during the week and still the off-season.

The one that mattered, however, was open.

I was looking for some incense to burn for Manannan. This little shop had some typical beach-gift stuff, jewelry – and a corner full of crystals. The energy there was so intense, I got shaky and a little queasy. The owner came and asked if I needed anything, and I mentioned the energy – to which she said, “well, you are a bit of an energetic mess right now, aren’t you?”

And then proceeded to tell me all about myself.

I know there are plenty of fake psychics out there, but when the real deal reads you, you know it. She saw all my traumas, knew I’d suffered the death of someone close, and that I was in a bad state. She said I’d suffered from psychic attack after psychic attack. That I needed to clear my energy. Also some more stuff that even on a blog where I remain anonymous is too personal to share.

So I bought some sage from her and some incense for Manannan. And as I left her shop, there was a hawk, right in front of her shop, no more than 10 feet off the ground.

A hawk. At the beach. Near the ground.

I stood and watched until he flew off, and only realized half a block away that my mouth was still gaping open in astonishment. 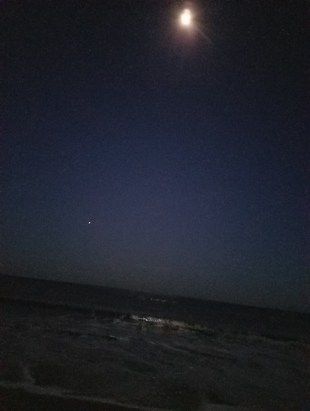 I burned some of the incense at sunset on the beach. After dark on my hotel balcony I lit the sage and spent some time smudging myself. It came to me that I needed to cleanse in the ocean as well. So, at the point of low tide, I went back out under the almost-full moon and called upon Manannan.

I waded into the water, which was cold only when it first hit me. After that it felt much warmer than the cold wind that was blowing.

The plan had been to dunk myself in the waves, as a baptism of sorts. But it was just TOO cold out – the temperature was in the low 50’s before the wind chill, and the area was under a “strong wind advisory.”

So instead I washed my hands, arms and face. I rejected any connections from the people who had (most likely unknowingly) sent me negative energy. I cast off depression and anxiety and any negative force that would come against me.

I left everything that would harm me in the sea.

Despite having been up so late, my goal for the trip was to see the sunrise. So after just a few hours sleep, my alarm went off WAY too early. But I was still riding high from my ceremony on the beach earlier in the night, so I bundled up and headed down to the water.

I kept speaking to Manannan – I felt His presence very strongly – as the sky began to light up. By the time the sun had broken the horizon I felt that He wanted to come home with me, to be part of my pantheon. 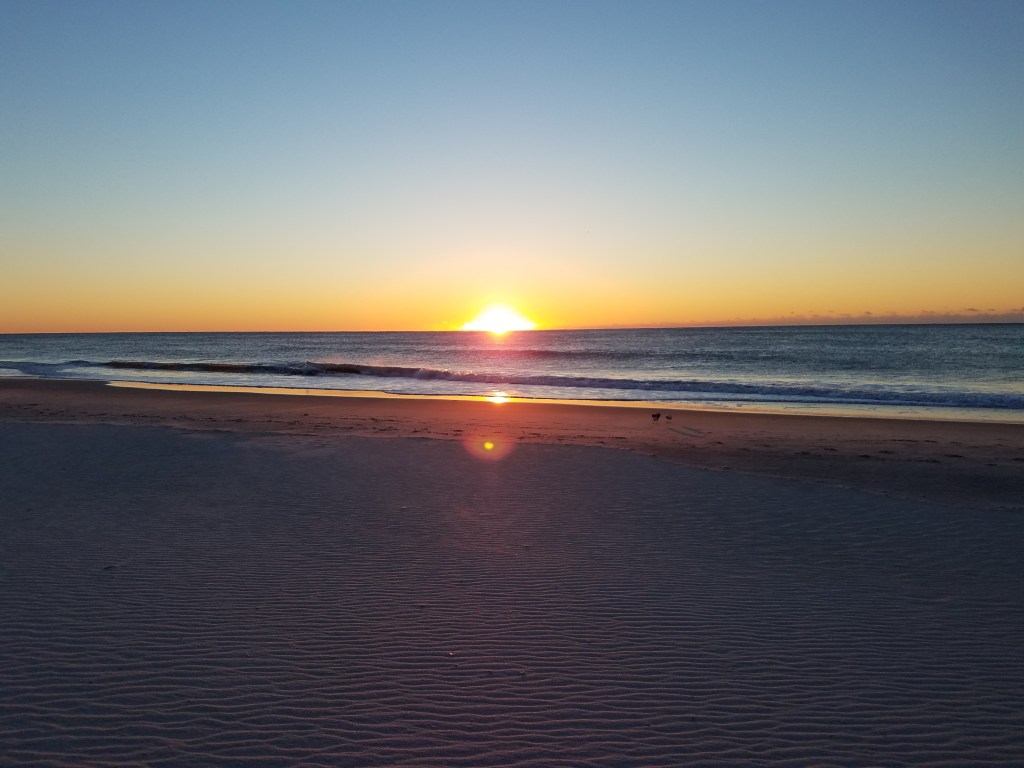 And as I stood at the edge of the waves, letting them wash over my feet, He spoke to me.

You see, when you stand in the waves, the sand shifts underneath your feet. Each wave that comes and goes, pulls more sand out from under them. If you stay still long enough, you begin to sink down. Eventually, you won’t be able to hold your balance and you’ll fall in.

You can’t stay still on shifting sand. You have to keep moving or you’ll fall, and maybe even drown.

In my life, I’ve tried to hold on to things – jobs, relationships, etc. – that no longer serve me. The sand has shifted underneath me, and I’ve tried to stay in one spot. Even if some of those relationships are close family. Even parents. If they bring harm and abuse, I have to move on and leave them behind. Otherwise the pain of mistreatment will drown me.

That was the message I got from Manannan Mac Lir, God of the Sea. Now that I’m home, it’s helped me tremendously. I hope it helps you as well. 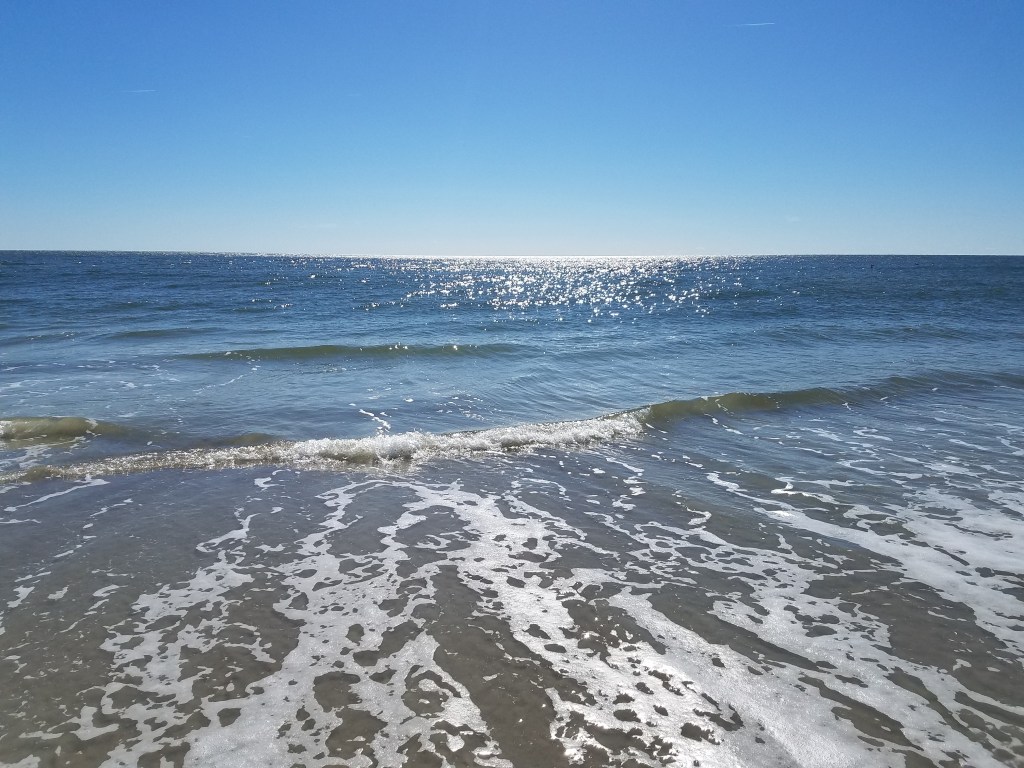