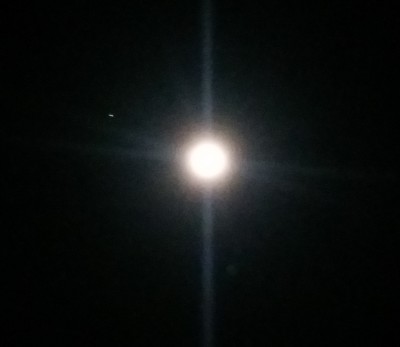 Home » My Pagan Path » Speaking in Tongues: A Familiar Energy

It was the full moon and the weather was nice for the time of year. So I was sitting in my front yard, in an isolated spot with my candle. I imagined roots growing from my base reaching deep down into the Earth, pulling up energy like a plant does water.

Suddenly, I felt Spirit. A LOT of Spirit. It surrounded and filled me all at once. And as wonderful as it felt, it felt wonderfully familiar. Which confused the hell out of me.

You see, back in my days in the United Pentecostal Church, we raised this energy every service. We called it the Holy Ghost. It was the spirit of god and it was the primary objective of being at church: raising this energy, getting full of it and speaking in tongues. This is how you know you’re saved and in good standing in the UPC.

But here I sat, doing a pagan full moon ritual and I felt the same spirit. How could this possibly be? There’s no way the god of that church could possibly be happy with what I was doing – aren’t these two paths completely exclusionary?

Still, there was no denying what I was feeling. Further, the more I drew in the energy and the stronger it got the more I wanted to do what I did back in the Pentecostal altar. And then I found myself speaking in tongues.

Immediately, warning signs started going off in the back of my mind. I heard the voice of every fire-and-brimstone preacher I’d ever sat under reminding me that the ONLY sin that is unforgivable to God is “blaspheming the Holy Ghost.” And wouldn’t what I was doing right now count?

But I could not deny what I was experiencing. So I went with it. And I had one of the most powerful experiences of my pagan path so far.

Over the following week I tried to process exactly what was going on. Could it be that the energy raised in pagan ritual is the same as that raised in the fundamentalist Christian service? What would this mean?

I did some googling and discovered that speaking in tongues wasn’t invented by Christians on the day of Pentecost. Turns out, pagans had been doing it for centuries before that day:

— 1100 BCE: In a work of historical fiction, a man named Wenamon is dispatched by the temple of Amon in Egypt to secure cedar logs to build a ship. When he arrives at Byblos (in modern day Lebanon) a servant of the prince falls into a prophetic frenzy, including speaking in tongues, and then demands that Wenamon and his god be treated with respect. This is the oldest known reference to what modern scholars call glossolalia.

— Pythia, AKA the Oracle of Delphi, was established in the 8th century BCE (although many believe the site and oracle had been in honor of the goddess Gaia prior to this and going back to the 14th century BCE). From that time up until about 395 AD the Oracle gave prophesies that included speaking in tongues.

— Plato also reports religious ecstatics in roughly the 5th century BC. In the accounts we can observe that in each instance reported by Plato the speaker had no control over his mental faculties, he did not know what he was saying, there was the need for some sort of interpreter or diviner who would tell what was said, and the person was allegedly under the control of a god.

— Virgil, writing about 17-19 BC, mentions a Sibylline priestess who would go into an ecstatic state where she was unified with the spirit of Apollo, and she would begin to speak in tongues, in ecstatic utterance. They claimed that it was known language.

— Many so-called “Mystery religions” popular in the last century BCE and the first century CE practiced speaking in tongues.

So, like all the big holidays, many of the saints and even much of the doctrine, Christianity actually stole or borrowed the concept of speaking in tongues from the preexisting pagan religions. Needless to say, this definitely made me feel better about my full moon experience. If this spirit is not exclusive to Christianity then I can’t very well condemn myself for all eternity just by accessing it outside of the Christian faith.

But still… the idea that the energy I felt in both my full moon meditation and the Pentecostal altar felt exactly the same made me wonder. How does it all connect?

Not long after I was visiting a local Wiccan store and spoke to the owner about my experience. She, too, had at least visited Pentecostal churches before. And she absolutely agreed it was the exact same energy. In her experience, the churchgoers were quite good at raising the energy, which she said was then “pinging off the walls” while the people ran around the building or danced. She said she could only imagine what they could do if they learned to focus the energy and use it.

Which is when it hit me: All this time I’ve considered myself a complete novice in paganism, thinking I have to start over from square one. But guess what? I’m not. Yes, I have a TON to learn. But one thing I do know is how to raise spirit energy. I can raise a lot of it.

Now, my job is just to learn how to use it.

10 thoughts on “Speaking in Tongues: A Familiar Energy”