Home » My Pagan Path » Tara: Seat of Kings, and one Great Queen

The day I landed in Ireland I was exhausted, aching, and completely overwhelmed.

After getting the rental car I was supposed to stop at this town called Swords that had a large shopping center. The idea was a cheap coffeemaker, grinder, and flat iron for the bestie as none of our electronics would work with Irish voltage.

I found none of these things, parking freaked me out (driving on the left in a parking lot is more confusing than you’d think) and none of the stores were familiar.

Before my anxiety got to the point I couldn’t drive at all, I left and checked into my campsite. I was shaky, exhausted, and near tears because I really wanted Tara to be my first stop. 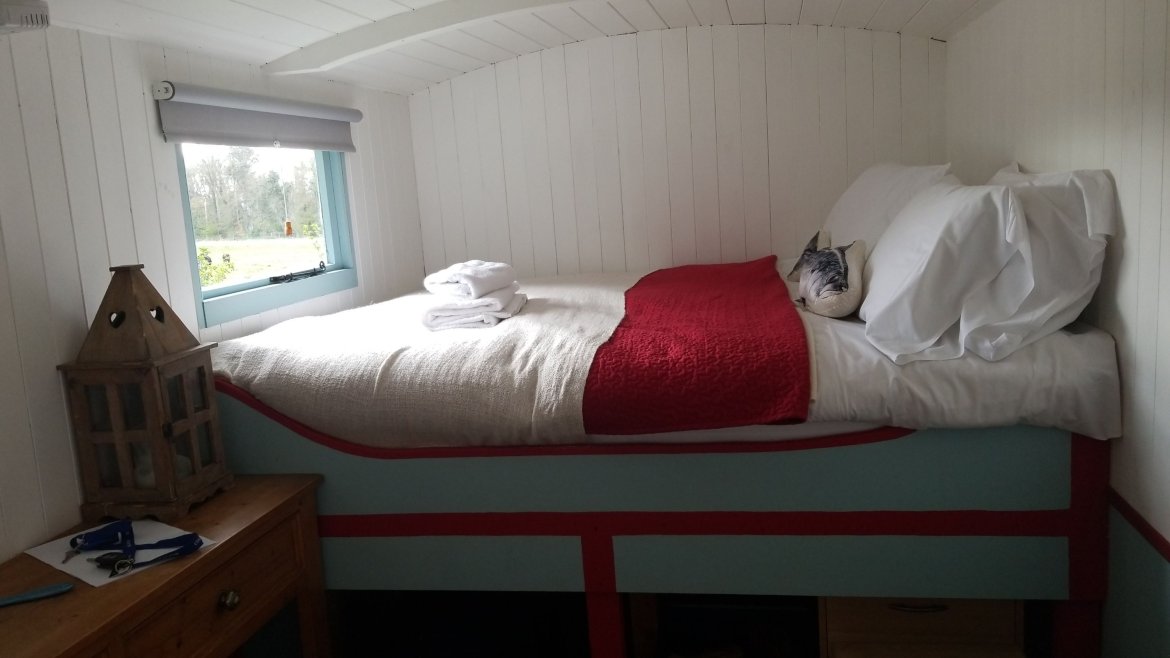 When I checked into the Shepherds Hut (isn’t it cute??) The receptionist assured me I had plenty of time for both a nap and a visit to Tara. It was only 20 minutes away and sunset wasn’t till after 9pm.

This was the first lecture in the Big Lesson I learned on this trip: none of this is going to be easy. Push through anyway.

A few hours later I arrived calmer and a bit rested to find I was almost the only visitor. Which was perfect. The weather was mostly clear, just spitting a bit of drizzle every now and then. Fantastic by Irish standards.

The old church is actually quite beautiful. I got a great picture of the moon hovering over it.

Of course that wasn’t what I was there to see, so I hurried on up through the cemetery and out on to the Hill itself.

Where my breath was taken away.

The setting sun seemed so appropriate, and really added to the atmosphere. I stood there gazing around and realized I was standing in the place the Old Gods from all the stories were said to have stood. It was a powerful moment.

Then I came to the Mound of Hostages:

Unfortunately it was fenced off or I would have climbed to the top. For this is the very place, in the Cet-Cath Maige Tuired (First Battle of Moytura) where:
“It was then that Badb and Macha and Morrigan went to the Knoll of the Taking of the Hostages, and to the Hill of Summoning of Hosts at Tara, and sent forth magic showers of sorcery and compact clouds of mist and a furious rain of fire, with a downpour of red blood from the air on the warriors’ heads; and they allowed the Fir Bolg neither rest nor stay for three days and nights.”
source: Morgan Daimler

I was actually standing in the place these myths took place. It was powerful and holy.

My next stop was, naturally, the Lia Fail or Stone of Destiny. Legend says this is the very spot inaugurations took place, and that when the rightful king touched the stone it would cry out.

Sadly, it didn’t cry out for me, although we might could argue it was weeping over the missed opportunity in the last pic.

At this point I just sat on the edge of the hill, soaking up the spirit of this magical place. And was rewarded with this:

A Visit From The Great Queen

If you head backwards towards the church, there is a huge ruin that has been called the Banqueting Hall for years. And it does have a shape similar to an old longhouse.

Today, however it’s considered more likely that this was the avenue of ceremonial approach. It was here that I had my most direct connection with The Morrigan.

As I wandered this avenue, a single crow flew away from the huge group congregating at the church and flew in a circle around me. Counter-clockwise.

I immediately saw in my mind the vision from the very first guided journey I did with Lora O’Brien to meet The Morrigan. In that journey, the Goddess had rushed at me, separated into dozens of crows flying circles around me at high speed and with a lot of noise. They, too, were flying counter-clockwise.

I’d been very concerned about the direction at the time, as all I knew was clockwise is for blessing and counter (or “widdershins”) is for cursing.

But at least now it seemed She had some sort of purpose, and that my being here was part of it.

Then The Answer Was Revealed

After I got home, I read another blog post by Morgan Daimler. In it she says:

However while widdershins does have a particularly strong association with hexing and negative magic today, and is even viewed by some Christians as both unlucky and even blasphemous in relation to sacred sites, it was used for positive ends including healing and its historic association with witchcraft is likely, in my opinion, why in modern terms we view it entirely as negative.

In these examples of healing we see widdershins motions being used to remove illnesses and work cures on ill people, resulting in a positive outcome for the patient. As previously mentioned widdershins motions were also associated with entering Fairy as well.

The Great Queen Herself is working my healing. And I can say that I am doing much better emotionally since my trip.

It won’t happen overnight – a lifetime of wounds don’t go away in 2 and a half weeks. And as I learned, I still have to push myself through the bad times.

But She’s helping. Working her healing magic, and guiding me through what I need to do.

Tara was only the beginning.