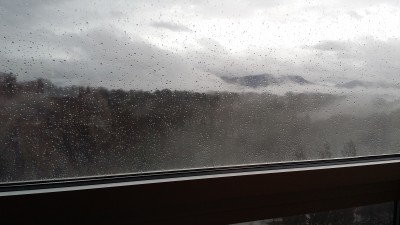 Home » My Pagan Path » The Sins of the Father

I’m going to take advantage of the fact that I’ve remained mostly anonymous on this blog and dive into some family dirt.

My grandmother is back in the hospital, and I spent Christmas in western NC visiting her. My aunt is the one that mostly takes care of her, because my dad not only lives on the other side of the state but is a bit too wrapped up in himself to be much use in that regard. He mostly functions as your neighborhood emotional bully, disapproving of every decision my aunt makes and the care she gives my grandmother.

My aunt and her husband are now retired, and they worked like dogs their whole lives in order to have a nice retirement. My uncle has some land he inherited from his parents, and they’ve been building their dream house on it for the last 2 or 3 years.

Enter grandma. At 86, I’d estimate she’s been a smoker for about 70 years. Even after she had emphysema, even after she was told it would kill her. She clung to her right to smoke as if she were Wayne LaPierre facing the repeal of the 2nd Amendment. At one point, my aunt literally got on her knees and cried, begging her to stop. Grandma’s reply was to get angry and say, “It’s my life and I’m not hurting anyone but myself!”

And maybe right then she wasn’t. But eventually it comes time to pay the piper, and you don’t always know how big the bill will be. In Grandmas case, emphysema has destroyed whole sections of her lungs. Her diminished capacity to get oxygen has resulted in some brain damage and severely weakened her entire body. For at least the last year she’s been unable to live on her own.

So guess who’s life got turned upside down? Not grandma’s. Sure, she’s suffered. But she’s a stubborn old Appalachian Mountain woman. And as long as she had the mental capacity to refuse any kind of assisted living or nursing home, she planted her feet in her house and refused to budge. Last year I visited her in the hospital because she’d fallen and couldn’t get up, and nearly died except that my dad happened to call and realize there was a problem and called 911 from the other side of the state. After that, it was my aunt who had to drop everything and move in with her. Grandma vetoed all other alternatives, insisting she could stay by herself just fine despite all evidence to the contrary.

As the dream house they’d worked their entire lives for was coming together, my uncle stayed there (about a 45 minute drive) while my aunt stayed with grandma. Grandma required constant, minute-by-minute supervision. Any time you turned your back, she’d try to get up and go to the bathroom by herself or something and fall and get hurt. My dad has come to stay with grandma a few times so that my aunt could get a break, but even that has been a mess. He doesn’t come when he says he will and doesn’t stay as long as he’s supposed to. I spent a week there this summer. But mostly, its been all my aunt all the time.

During all this time, my grandma has not once offered a thank you or a word of appreciation for my aunt. She’s barked orders, thrown shade, and stubbornly continued her refusal to be anywhere but at home until just recently when there just was NO other choice.

Now that the dream house is complete, and grandma is very near to death, my aunt has no joy in it. She doesn’t even feel like moving in.

So while I was there, I spent some time with my aunt. Over a bottle of wine we discussed our family. As you might imagine, my aunt is dealing with some very mixed emotions right now. She’s angry at what my grandma has done both to her and to herself. She’s exhausted. But on the other hand, Grandma is her mother and she loves her, and she’s going to lose her soon.

What made Grandma into the stubborn old lady she is? Well, when she was a little girl, she had a daddy exactly like mine. (In fact, if you believe in reincarnation at all, her dad is most certainly also her son. He died not long before my dad was born, and they not only look alike but by all accounts have nearly identical personalities. And the same addictions to alcohol and gambling.)

My great grandfather scarred my grandmother so bad, my aunt says she grew up hating this man she’d never met. Just from the stories.

“Keeping mercy for thousands, forgiving iniquity and transgression and sin, and that will by no means clear the guilty; visiting the iniquity of the fathers upon the children, and upon the children’s children, unto the third and to the fourth generation.” – Exodus 34:7

It became crystal clear to me on this trip that this verse isn’t about God punishing children because their parents are bad. It’s that messed-up parents mess up their children, who grow up to become messed-up parents messing up their own children. My great-grandfather scarred my grandmother, who scarred my father, who scarred me. I’m sure my scars have impacted my children as well.

I had a long talk with my oldest son about this. About how I do not want to repeat this cycle, and how differently I want things to be when it’s his turn to sit at my death bed. He brought up other verses that contradict the one above saying that if you sin, you suffer. But the bottom line, I think, is awareness. My aunt has been aware of this pattern and avoided it with her daughter. I’m aware, and according to my grown son have done a decent job so far of at least minimizing it for them. My grandma and my dad are not the type to soul-search, and so have perpetuated the cycle as if they were on auto-pilot.

There’s a new year just around the corner. I hope everyone reading this, no matter what your beliefs, spends some time with yourself during this dark time of year. What cycles are you repeating? What are you doing now, even if you think its only to yourself, that will impact those around you later? What can you change to make things better and easier for those that come after you?

That’s what this time of year is for.