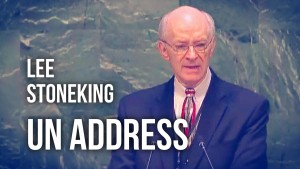 In case you missed it, UPC superstar evangelist Lee Stoneking spoke to the UN toward the end of April. And totally exaggerated, misrepresented, and LIED about his infamous (inside the UPC) testimony about being miraculously healed from a heart attack. If you haven’t read it, please do.

So I have a bit of an update.

One of the things we dug into in that article was the “Official Medical Report” by Dr. Jeff Young, Jr. “Doctor” Young (I’ll explain the quotation marks in just a minute) was not on the scene for any of the relevant events and only assisted in treating Stoneking after he came back to the US. I mentioned that he was most likely a UPC member since he frequently referred to Stoneking as “Brother” in the report, but didn’t know much else.

Then I got a comment from agnosticpoet yesterday that really blew it wide open. He mentioned that Young was the son of a UPC pastor. So I decided to do some digging. I pulled up Stoneking’s website again, and looked back over his “My Miracle” page. And then it slapped me right in the face, to the point I couldn’t believe I missed this connection the first time. From Stoneking’s account of his story:

Immediately upon hearing of my physical condition and what had happened to me in Sydney,  Pastor Jeff Young Sr. from Bethel Springs, Tennessee caught the first plane to Sydney and was at my side in the hospital room as soon as possible.

So, Pastor Jeff Young, Sr. is a close enough friend of Stoneking to travel to the opposite end of the globe to sit in his hospital room. A quick Google search shows that Jeff Young Sr. pastors The Springs of Bethel UPC in Bethel Springs, TN. According to the church website, the church has two locations: Bethel Springs, and Jackson, TN.

So clearly, “Dr.” Jeff Young, Jr. is not only a active member of the UPC with a vested interest in this story being true, he’s also too close to Stoneking to be objective.

But Who Is This “Doctor” Young? 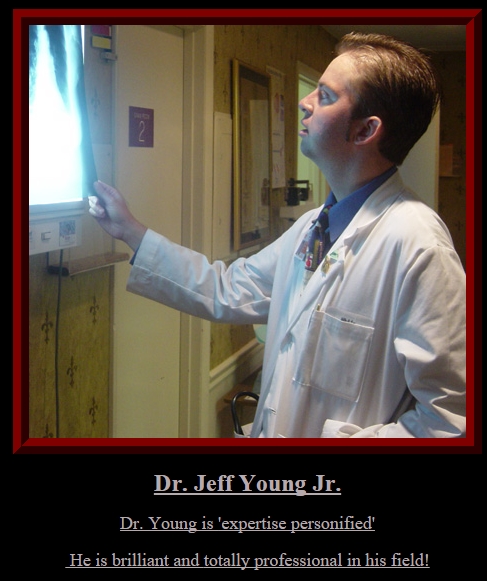 So once I had a location, a google search quickly revealed a Jeff Young Jr. in Jackson, TN. As you can see in the screenshot to the left, Stoneking considers “Dr” Young to be brilliant, totally professional, and ‘expertise personified.”

The only Jeff Young Jr. that comes up in Jackson, TN (and how many can there be?) isn’t an MD. He’s an ARNP – a Nurse Practitioner.

Hence my placing “doctor” in quotation marks. In several states it is in fact ILLEGAL for a Nurse Practitioner to refer to themselves as “Doctor.” Unfortunately, Tennessee isn’t one of them.

So when “Dr.” Young writes his “Official Medical Report” (which is bogus for so many reasons explained in the previous article) he is a Nurse Practitioner giving his opinion of a cardiac event he did not witness, interpreting actual medical reports received from an actual Cardiologist who did treat the event and patient in question.

I ask again, if there is a REAL medical report by a REAL doctor, who REALLY treated Stoneking for his REAL heart attack, why on earth is this Nurse who had nothing to do with it until after the fact writing the report on the website?

Oh, because the original medical report doesn’t support the story as Stoneking wants to spin it. That is the only explanation.

At this point there is almost no detail that Stoneking hasn’t embellished or distorted in some way. One of them is puffing up the qualifications of Nurse Practitioner Young.

According to the website Healthgrades.com, Nurse Young has a rating from patients of 3 out of 5 stars. After ratings from 5 patients, his averages are as follows:

Level of trust in provider’s decisions – 3.0

All of which are below the national average.

Blue Cross & Blue Shield lists Nurse Young as one of their providers. 7 of their members have rated him for an average 3.5 out of 5 stars. Their profile also says under “Specialties and Procedures” that he is a “Practical Nurse – Not Board Certified.”

So Stoneking’s “Doctor” – “expertise personified” – is nothing more than a below-average Nurse Practitioner.

It seems to me that “Brother” Stoneking (this time the quotation marks are for me – he’s still got his status in the UPC but I’m definitely out so he’s no brother of mine) lives in the past in more ways than one. I’ve got some stuff coming up about what he thinks of women, but clearly in his mind he lives in the age before the internet, where stories couldn’t be so easily fact-checked and people had no choice but to take you on blind faith. Oh, and he lives in a time when yellow print on a black background was acceptable web design. Someone should really pray the devil out of his webmaster.

Then again, don’t. I can’t imagine the ridiculous story he’d build out of that.

12 thoughts on “Rev. Lee Stoneking Lies At The UN Part 2”