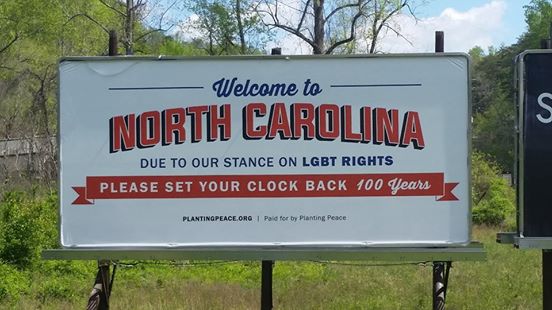 I am so sick of hearing the stupid line, “men have no business in women’s bathrooms.”

It’s a ridiculous mischaracterization of transgender WOMEN. But over and over, the roughly 35% of North Carolinians who still support House Bill 2 trot that line out to defend it. When you call them on the harmlessness of the transgender community, pointing out the fact that there’s NEVER been an instance of a transgender person assaulting someone in a public restroom, they switch gears. “It’s not about transgender people themselves,” they’ll say. “It’s about the fact that real perverts and predators can PRETEND to be transgender to commit crimes, and without this type of law nothing will be able to stop them.”

Like existing laws against assault or rape, etc, just don’t apply in the bathroom.

Baseless Fearmongering At Its Finest

Nonetheless, from the beginning the rational among us have known that this law is unconstitutional and would be struck down. On April 19th, the 4th U.S. Circuit Court of Appeals ruled in favor of 16-year-old Gavin Grimm, a high school student in rural Virginia, saying has the right to use the restroom designated for the gender with which he identifies. And that not allowing him to do so is discrimination and a violation of Title IX of the Civil Rights Act.

North Carolina is in the same district, and in fact Gov. McCrory had filed a friend of the court brief in support of the bathroom ban in Virginia. When the news of the ruling came down he appeared rather glum in a press conference where he promised the state would “evaluate” what to do next.

The NC GOP should have seen the writing on the wall with the 4th Circuit ruling, but when the legislature went back into session on April 25th, it became clear that “evaluating” was all that was happening. Despite protests and calls for the repeal of HB2, state Republicans dug in their heels.

Yesterday the Department of Justice issued a letter to Gov. McCrory informing him that HB2 violates Title IX, which bars discrimination in education based on sex, and Title VII of the Civil Rights Act, which bans employment discrimination. It gave the state until close of business on Monday to, “respond “by confirming that the State will not comply with or implement HB2.”

The Justice Department letter came two days after the Equal Employment Opportunity Commission posted a fact sheet reminding everyone that it’s a civil rights violation to deny transgender employees access to a bathroom based on gender identity. In 2015 the EEOC ruled that a civilian transgender woman working for the Army had been discriminated against when she was banned from using the common women’s restroom and forced to use a single bathroom. 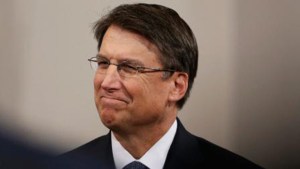 Meanwhile, the DOJ also sent a letter on Wednesday to the 17-campus University of North Carolina system that the state law violates Title IX of the Civil Rights Act, which bars discrimination in education based on sex. That could lead to North Carolina losing hundreds of millions of dollars in federal school funding.

Again, the preponderance of evidence is that this law had no chance of surviving court scrutiny. Anyone with a brain could have told the hysterical Right Wing that this was going to happen. And several NC newspapers are pointing out that even if the whole debacle was just an election year stunt (that has backfired spectacularly) designed to gin up the Republican base, the DOJ letter gives lawmakers an out – they have an excuse now to repeal it while still saving face.

Are they gonna take it? Of course not. They’re bleating about “government overreach” (ironic considering this all started when they did to the city of Charlotte what they claim the DOJ is doing to them) and the Obama administration’s “radical left-wing agenda.”  Today House Speaker Tim Moore said,

We will take no action by Monday. That deadline will come and go. We don’t ever want to lose any money, but we’re not going to get bullied by the Obama administration to take action prior to Monday’s date. That’s not how this works.”

Right. We’re slow and deliberate and we’ll move when we wanna move – says the guy who rammed this stupid travesty of a law through the legislature in 13 hours.

Well McCrory, Moore and Head Fearmonger Senator Phil Berger are about to learn “how this works.” After they blow millions of dollars defending their bigotry in court and discover that no matter how badly they want to they cannot go back to 1950, they’ll likely get voted out of office to boot.