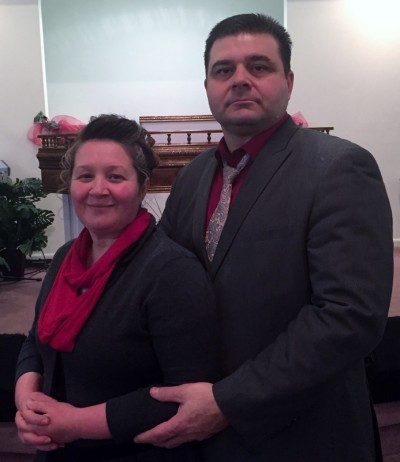 The Truth Apostolic Church in Madisonville, KY is having a very bad week. Not only did their pastor, Michael Orten, hire a convicted child rapist and put him on the “outreach team” where he (among other things) runs the Bus Ministry (which gives children a ride to Sunday School) he doubled down on his support of the man when confronted by local media.

Not only did he say that rape is the equivalent of “stealing candy” on the sin-scale, but in regard to the 13-year-old victim of his Care Ministry and Outreach Director who was raped and sodomized with a razor held to her throat, he said,

“It takes two to tango,  okay?  So if that girl chooses to sleep with him, she’s just as guilty as he is.”

This takes victim blaming to whole new levels. Sounds like Pastor Orten would be right at home in Saudi Arabia or other parts of the Middle East where rape victims can be stoned for their “crime.”

And lest you think I’m making any of this up, here’s the local news report on the story:

We’ve discussed before how sin forgiveness impacts Christians when it comes to sex crimes. In Josh Duggar’s case, supposedly he was a changed man due to the blood of Jesus and could now be trusted. Until of course he was discovered on Ashley Madison and the whole “new creature in Christ” thing got a lot more shaky. Here in my own state, a Christian school principal was sentenced to probation and lost her job at the school she founded for hiring a convicted sex offender as a janitor. At her hearing, Joan Dayton said:

“I believed he was redeemed, and I believe that to this day. And I let him back on campus.”

At my own UPC church, I, too worked on the bus ministry for several years. I told this story in the article linked above regarding Josh Duggar:

At my own church, there was a young man who acted inappropriately to some of the kids being picked up on the church bus. He claimed to have a “burden” for one young teen boy in particular, and would spend the bus ride to church praying in tongues for the boy, while running his hand up and down the boys thigh. Seriously, I personally witnessed this. The bus ministry director wouldn’t let me kick him off the bus until the parents complained that the young man was starting to drive by their house constantly, watching the kids outside playing. In other words, acting like a creepy stalker.

The Pastor also wouldn’t ban this young man from attending church, only from participating in any ministry involving children, and he wasn’t supposed to be on the church property while the church school was in session. He was, however, allowed to attend church services in hopes that God could fix him. Which meant that he was in the men’s bathroom when young boys were in there. My own children were told in no uncertain terms that if he was in the restroom they were to wait till he left, and if he ever so much as spoke to them they were to tell me immediately. Fortunately for him, he never did.

Eventually he went to jail for molesting another young teen boy. Lucky for the church it didn’t happen there or to anyone connected.

So this is yet another case where religious belief is supposed to trump the law. Thomas Hopper has multiple convictions for sex related crimes, and has been in jail more than once AFTER serving his time for raping the 13-year-old girl. But at some point his conversion has finally “stuck” (according to the church’s outreach website Hopper’s parents were UPC and, “raised him to believe our glorious truth.”) So now he is in charge of bringing children to church and even preaches. The same web page says that he and his wife believe that, “God is leading them towards a ministry in part time evangelism and eventually a Pastoral ministry.”

Yep. This guy plans to one day be in charge of a whole church. Isn’t God good?

Hopper Is Safe Enough To Share Pew With Young Girls

In the following video from a Truth Apostolic service, Hopper can be seen sharing a pew with a preteen girl while Orten preaches about “following the law of god.”

Fallout Has Been Swift

Since the story broke 3 days ago, the official website for Truth Apostolic has been taken down, as has their Facebook page. The website for the outreach ministry is still up as I write this, however. I imagine that won’t last long so I’ll post some screenshots instead of just linking.

In case the print is too small, Hopper grew up in this church and his parents “raised him to believe our glorious truth.” He “accepted his calling as minister of the gospel” under the leadership of Rev. Orten. Oh, and this couple want to lead their own church someday. Where he will be the ultimate spiritual authority over multiple families. Yeah, that sounds like a good idea.

Another section of the website I found interesting was the “About” page on the outreach ministry. This page is apparently written by Thomas Hopper himself as he mentions “my wife, Bobbie.”

Kingdom Builders teaches you the basics and more about your spiritual walk. We also are developing leadership classes that cover such topics as these: how to deal with people; being a leader in your home; Spiritual Authority; the importance of a Pastor; Accountability and its importance; and many other topics. Kingdom builders and the leadership classes are mandatory to be involved with the Mission 2:38 outreach team.

So what are the other requirements of being a part of the Mission 2:38 Outreach Team? Glad you asked!!! If you want to be a part of our team and you have made Truth Apostolic Church your home church, then come to me or my wife, Bobbie, and let us know. We will take your name to the Pastor and Assistant Pastor for final approval. You will then be placed on the Outreach Team and will be eligible to participate in all outreach activities.However, to maintain your role in the outreach team you must do the following:

Notice what’s important here: The authority of the pastor and other leadership. Any criticism of any of the church leadership disqualifies you. And be sure you pay those tithes and offerings.

Glad to know this church CLEARLY has it’s priorities in order. I’m sure the UPC is proud to have them in the fellowship.