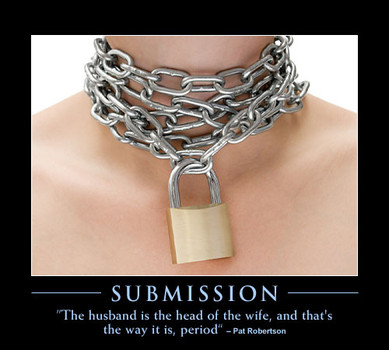 Home » Politics And Religion » The Christian Cult » Christianity and Women

I look back now at my time in fundamentalist Christianity, and mostly I think… “What the hell was I thinking??”

Case in point: how the Bible treats women. This isn’t unique to the UPC, but they definitely go right along with it. Even though as they do, they try to claim that they aren’t being discriminatory, that women are totally equal to men, made in God’s image, just as important.

Equal, but not allowed to make decisions that her husband disagrees with. Equal but not allowed to be in any kind of leadership unless it’s over children or other women. Equal, but ultimately responsible for the downfall of humanity by being the one who usurped the authority of Adam and caused sin to enter the world.

In fact, I remember being told – and parroting – that wherever Christianity went in the ancient world and today it actually was responsible for ELEVATING the status of women. That Jesus was quite pro-woman. After all, he took the side of the woman caught in adultery. He spoke to the woman at the well when it was taboo. He treated Mary and Martha so well.

Above all, after his resurrection he appeared to Mary Magdalene before any man, and she was the first person charged with sharing the gospel. You could call her the First Apostle. She was, after all, the one who told the guys who actually got to use the title.

This same Jesus, however, chose exclusively men for his inner circle of 12. He instructed those disciples to leave their wives and families behind when they were called. What exactly did he think was going to happen to those abandoned families? In that time and place, women weren’t allowed to work outside the home or earn any money to support themselves. How then was it righteous for Peter to abandon his wife and children to run off after Jesus? Only if women and how you treat them don’t count.

What The Bible Says About Women

Woman wasn’t even created for herself, like man was. She was created as an accessory to the primary creation, man.

To the woman he said, “I will greatly increase your pains in childbearing; with pain you will give birth to children. Your desire will be for your husband, and he will rule over you.” (NIV, Genesis 3:16)

But I want you to understand that Christ is the head of every man, and the husband is the head of his wife, and God is the head of Christ. Any man who prays or prophesies with something on his head disgraces his head, but any woman who prays or prophesies with her head unveiled disgraces her head–it is one and the same thing as having her head shaved. For if a woman will not veil herself, then she should cut off her hair; but if it is disgraceful for a woman to have her hair cut off or to be shaved, she should wear a veil. For a man ought not to have his head veiled, since he is the image and reflection of God; but woman is the reflection of man. Indeed, man was not made from woman, but woman from man. Neither was man created for the sake of woman, but woman for the sake of man. For this reason a woman ought to have a symbol of authority on her head, because of the angels. (NRSV, 1 Corinthians 11:3-10)

This passage is the one used in the UPC to forbid women from cutting our hair. We weren’t allowed so much as a trim to take care of split ends as we were told that uncut hair = our veil, our symbol of authority on our head. The rest of Christianity doesn’t see it that way. Other than that, the verse is very clear: Women, your husband is your master. You are nothing in yourself, but exist merely to be a reflection of your man. This is why you were created.

As in all the churches of the saints, women should be silent in the churches. For they are not permitted to speak, but should be subordinate, as the law also says. If there is anything they desire to know, let them ask their husbands at home. For it is shameful for a woman to speak in church. (NRSV, 1 Corinthians 14:33-35)

Be subject to one another out of reverence for Christ. Wives, be subject to your husbands as you are to the Lord. For the husband is the head of the wife just as Christ is the head of the church, the body of which he is the Savior. Just as the church is subject to Christ, so also wives ought to be, in everything, to their husbands. Husbands, love your wives, just as Christ loved the church and gave himself up for her, in order to make her holy by cleansing her with the washing of water by the word, so as to present the church to himself in splendor, without a spot or wrinkle or anything of the kind–yes, so that she may be holy and without blemish. In the same way, husbands should love their wives as they do their own bodies. He who loves his wife loves himself. For no one ever hates his own body, but he nourishes and tenderly cares for it, just as Christ does for the church, because we are members of his body. (NRSV, Ephesians 5:21-30)

Got that women? Your husband is equal to GOD to you! You are to obey him in EVERYTHING.

I could go on, but really.. we’re taking about a 2,000 year old book. These passages have been proclaimed and debated for centuries. This is nothing new. But the question I have is, did Christianity just continue the status quo of how women were treated at the time? Did it (as my former church would claim) actually somewhat elevate women comparatively? Or did it actually repress them more than they were prior?

How Were Women Treated Before Christianity?

Recent discoveries are shedding new light on the role of women in prehistory. Before the patriarchal religions took root it seems that women were actually pretty much equal to men.

Of course, we’ll never know the true status of women in pre-history. If it had been recorded it wouldn’t be pre-history. Some have speculated that the earliest religion was fairly universally a mother-earth-fertility-goddess worship. But that over time as people figured out men’s role in reproduction and fatherhood society and therefore religion became more patriarchal. While it’s true that every ancient culture seems to have had some form of mother earth goddess, we can’t say that religion and society were matriarchal. Again, it’s pre-history.

What we can say is that pre-Christian religions all did allow for female Deity. Rome, Greece and many others had female priestesses and oracles. In pagan Britain queens led revolts against the Romans. So it’s a safe bet the whole “you’re responsible for all sin so sit down and shut up” idea was not elevating the status of women.