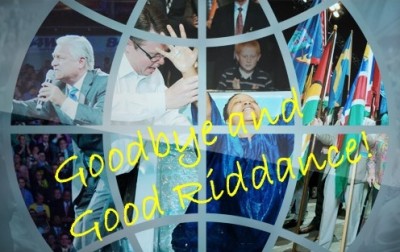 20 years is a long time. A lot of indoctrination. Three times a week, every week, sitting in church having those beliefs reinforced -its quite effective. So how did I finally work up the nerve to leave?

It was a gradual process. For a good year or more I just started missing more and more. We had a new pastor and while I wanted to like him some things he said during one-on-one counselling really made me angry. Then my husband took a job as an overseas contractor. He grew up in the church and is still quite involved. With him not around to keep me attending and keep me in check, I missed more and more and finally told him I wasn’t going back.

The seeds of my “backsliding” were nearly a decade old, however.

You see, I was very close to my paternal grandparents, especially my grandfather. As soon as I was converted and convinced that ONLY people who’d followed the “Acts 2:38 plan of salvation” were truly saved, I started “witnessing” to my grandparents. I desperately wanted them to reject their Baptist doctrine and get re-baptized in Jesus name and get the baptism of the Holy Ghost with the evidence of speaking in tongues.

My grandfather was a sweet man and never really said much about my efforts. My grandma, however, was understandably more vocal about her feelings. And they weren’t good ones. She was quite insulted that I was insinuating she was anything less than 100% “saved.”

Then my grandfather passed away.

According to the UPC doctrine, he was lost. Right that minute burning in Hell and would be suffering there for all eternity. This was the first family member I’d lost after my conversion and it hit me hard. I was nearly hysterical. I had nightmares. It was pure torture thinking of this sweet man, whom I’d loved so dearly – and who loved God btw – burning in never-ending fire and torment.

I would probably have stopped attending church then were it not for my husband, who simply wouldn’t allow such a thing to happen. But I was most definitely disillusioned with the whole thing. I alternated between thinking prayer was pointless – after all, I’d prayed hard for my grandfather – and trying to get God to help me feel better.

Over time I came to grips with the “fact” that my grandfather had died lost. Mostly I think the human mind just can’t continue to dwell in a state of such pain. I blocked the thoughts out of my mind. But when I did have to think about it, I was forced with a choice: Either this belief is wrong, or my grandfather is right now suffering in Hell.

I was having marital problems. We went to the pastor for counselling, and – surprise, surprise – he completely took my husband’s side. I am an executive in a start-up company so I’m expected to work a lot of hours. But I get to work from home. My husband was jealous of the time I spent at work plain and simple. The pastor’s response was that there was no reason I shouldn’t be able to sign off when my husband came home from his job and not open my computer back up again till the next morning.

I completely ignored him.

Finally my husband took the overseas job and within a few months I’d stopped attending all together.

The further I got away from the UPC church, the more my critical thinking skills returned. I completely rejected the idea that my grandfather was in Hell, along with every other person I’d ever loved and lost. And as I began to really notice the bad behavior of Christians in general, I realized it wasn’t just the UPC I didn’t want to be a part of, but Christianity as a whole.

I was taking martial arts classes and briefly investigated Buddhism. But as soon as I read about white lotus flowers appearing miraculously under the feet of the instantly-walking newborn Buddha I knew this was not for me. It seemed all I’d be doing was swapping one miraculous diety for another.

Eventually I realized I wanted something more nature based, and here I am.

4 thoughts on “What Finally Made Me Leave The UPC”