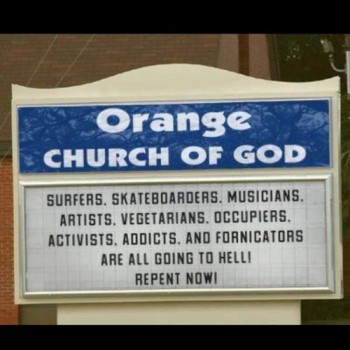 My Pentecostal pastor used to deride people who said they didn’t want to go to church because of all the hypocrites. He felt that this was unfair.

“Of course the church is where you find hypocrites!” he’d say. “Where else could they be? Being in church is what makes them hypocrites in the first place!”

He had a point.

But it wasn’t run-of-the-mill hypocrisy that turned me off. I have no problem with people who are ostensibly trying to live a “good life” yet fall short of the teachings in one area or another. Nobody is perfect, everyone falls short somewhere.

Hypocrisy Is One Thing.
Hate Is Something Else Entirely

The thing that really turned me against Christianity was the people who truly believe they are righteously justified as they spew all manner of hate and vitriol against anyone they consider to be non-Christians.

Now, I’m not one of those people who think any disagreement or criticism equals hate. If you honestly believe I’m doing something that will cause me to suffer for all of eternity burning in Hell, then I can understand you wanting to say something to me about it. If you’re sincere, and coming from a place of concern and compassion, and respect me if I politely decline to discuss the matter.

But more and more I was seeing the people I went to church with flat-out railing against “Muzzies,” “Homos,” Atheists, Catholics, Liberals, Feminists, Vegetarians… gleefully proclaiming how God was going to judge them and acting excited at the possibility of seeing them suffer eternal damnation.

Facebook: Where Hateful Christians Say What They REALLY Think

I saw a video of a sermon where the preacher said he’d found the cure for Aids in the bible, and he could single-handedly wipe out this terrible disease by Christmas. How? “Kill all the homos!” he gleefully proclaimed.

I posted this video to Facebook. Conservatives are always complaining that “moderate Muslims” don’t do enough to condemn the radical terrorists who want to kill all non-Muslims. So I felt like Christians should do the same when the terrorist was “one of ours.”

Yet nobody from church condemned him. Instead, I got comments about how surely he was “taken out of context” (he wasn’t) and one person who straight up said the guy was dead on. “God did say that in the Bible,” he declared. “Was He wrong?”

We Won’t Shut Up Because We Are Right!

As I began to be drawn more toward an Earth-based spirituality, I would read articles on things like astrology or meditation. And it never fails that the comments to these articles are hijacked by Christians who just have to shove their disapproval down your throat.

For example, this lady posted over a dozen similar comments on an article about understanding chakras:

Yeah, chakras are nothing but an open doorway to demon possession.  One trip to a Reiki Healer and you’ll be hurling pea soup just like Linda Blair. If that’s all you have to do to become Satan’s spawn you’d think he’d have enough souls in his clutches by now. How does one non-omnipotent, non-omnipresent being manage all of this inventory anyway?

They will argue to the death over this. They can’t just click “don’t show me this” and leave the rest of us in peace, either. They just HAVE to jump in and shove Jesus down your throat. Because they hold an exclusive Patent on Truth – and because everyone who believes differently is therefore damned to eternal fire – they feel it is their MORAL OBLIGATION to get in your face and argue you down. It’s for your own good, after all. It can’t possibly have anything to do with their own egos and wanting to be the smartest, most special person in the room.

That’s How You Turned Me Against You

Were it not for all of the above, I would have just gone merrily down my new Pagan path with not a care about those still back in the church. I would have said “to each his own” and not felt any animosity.

But because of all of THIS, I now actually have an active dislike for Christianity, and I’m nowhere near alone. You couldn’t pay me to darken the door of a church and I will now make it a point to spotlight the hatred and vitriol and general insanity I see from Christians. You asked for it.

So, Christians, if you’re reading this, do the rest of us a favor and STOP IT. All you’re doing is pushing us away. You’re exposing yourselves for the arrogant, legalistic, batshit-crazy loons you really are.

You turned me against you. How many others have you repulsed as well?

3 thoughts on “How Christians Turned Me Against Christianity”