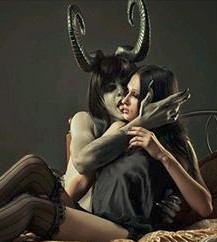 Ready for something completely ridiculous? This ad keeps popping up in my Facebook feed: 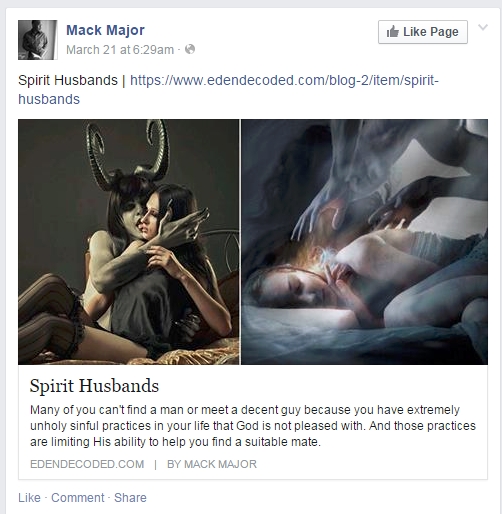 If you click on the link, you’re greeted with a ridiculous article about how you poor pitiful single women can’t get a man because your sex drive has enslaved you to a demon. And that demon is going to run off every other man that might be interested in you.

This man, Mack Major, is using all of this ultimately to sell a book. Clearly his only concern (besides subjugating women and telling us we’re evil) is the almighty dollar. Because his whole shtick is based on eradicating impure thoughts and stamping out lust.. but look at the images he uses to promote himself. Pretty damn hot actually.

I wonder how often he spanks the monkey thinking about all those helpless women being raped every night by their so-called spirit husbands? Think maybe this whole thing started out as his own sick, hot fantasy? That would be my guess.

In this twisted scenario, any sexual thoughts or feelings women might feel are not just impure and sinful, but straight-up demonic. Those dreams you have sometimes at night? They’re nothing to do with naturally-occurring hormones. No! They’re Satan himself!

Are There Spirit Wives?

Several people have asked Mr. Major this question. He addresses this in a post on his Facebook page:

Let’s not forget that MOST of these guys were raised by…wait for it…SINGLE MOMS!

These would be the same single moms who ran around saying how they don’t need a man to do anything for them, or they could do it all on their own.

Now that those women have raised these mama’s boys and playas for YOUR generation to be stuck with, you want them to stand up and be ‘real’ men? Nope: ain’t gonna happen. It takes men to teach boys how to be men.

You ladies are reaping what has been sown by yourself and women from a prior generation who thought in the same self-destructive pattern, just like you do.

Can you feel the contempt? The anger and hate dripping from him? “You ladies are reaping what has been sown by yourself…” WOW. Even if men DO have problems, it’s not their fault. It’s all the fault of “you ladies.” You evil, pathetic sinful sluts!

Another of his posts targeted to men says:

And please be aware that many women you see online or around you, showcasing all their lovely female assets, are really nothing more than secret agents of Satan sent to trap men’s souls via lust.

So quit giving such women props and attention in the hopes that she’ll give you a shot! That never works anyway, because women like that feed off your lust and attention. All they want is your worship anyway.

Poor men are hapless victims. It’s ALWAYS the evil woman who is at fault.

By the way… how exactly are you supposed to establish a family? Doesn’t that entail noticing, flirting with, dating, marrying and eventually – gasp!! – having sex with a woman??

Well, apparently there’s a very special type of woman out there that would be fit for such a “Godly man” to lead and start a family with. She’s a virgin of course. Perfectly submissive, and no doubt will worship the ground you walk on.

This one comes from an article on his blog (titled “The Vagina Dialogues“), and it’s almost gratuitous at this point but I can’t resist:

Here’s a shocker for you, Mr. Major: Your opinion of mine or any other woman’s vagina is irrelevant. We don’t need you or any other man to validate whether or not our bodies are sacred. Nor do we need your approval or sanction to enjoy our divinely given sexuality. In whatever way we choose!

Because guess what? My body doesn’t belong to ANY god. It belongs to ME and me alone!

What Are They So Scared Of?

Mr. Major is clearly a prime example of Christian Misogyny. But unfortunately, he’s far from alone. Why is Christianity so afraid of female sexuality? Before it arrived, back in the days of the Old Religion, female sexuality was celebrated. It was a cause for joy and wonder. But it’s not just Christians – look at the way women are treated in Islamic cultures. The root of the issue is that a woman’s sexuality is powerful. So powerful that patriarchal religions are scared to death of it.

Women, we have more power than we know. So much that men like Mr. Major here are petrified we’ll discover it. That’s why this type of ridiculousness really exists. They hate us because they fear us.

So the question to ask yourself is: Why? And what might you accomplish when you embrace that power?