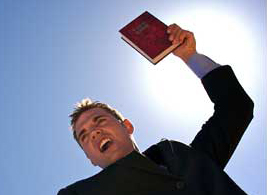 It was a beautiful night last night. The sun had just gone down and I was enjoying the silvery light of the moon, just reaching the first quarter of her waxing phase. Untill… (in your head imagine the sound of a needle being drug across a record)

My phone buzzes. I have a notification to my Facebook page for this blog. A message from a reader. Oh, cool! But then I read it. Here it is, copied and pasted just as it appeared to me:

In 1 samuel 26:11 david says The Lord forbid that I should stetch forth mine hand against the Lords anointed: Even when david had the opportunity to take sauls life he knew it was forbiden by God. Verse 9 and david said to abishia destroy him not:for who can stetch foth his hand against the Lord’s anointed and be guiltless?

You wrote an artical on bro stone Kings speech at the U.N..calling him a liar be carefull.his God’s anointed.

Numbers 12:1-13 What happened to miriam for speaking against Moses.?

Numbers 16: 23-33 He and all his family and all that were with him were swallowed by the earth.

You state that you were pentacostal, It had been better for you never to have known my word and walked away.

WELL!! Exactly how do you think that is supposed to make me feel, hmmm??

What This Is Trying To Say

It might help to translate a bit for those of you who didn’t spend 20 years steeped in the indoctrination of a fundamentalist church. Of course he’s talking about the several articles I’ve written on the demonstrably false things Reverend Lee Stoneking has said, especially in his speech to the UN.

The first bible reference is to the time after David was proclaimed by God to be the next king of Israel, but the old king, Saul was still on the throne. Saul went a bit crazy and was trying to have David killed. While Saul chased him around Israel, David caught Saul sleeping one morning and had the opportunity to kill him and put everyone out of their misery. But no, he wouldn’t harm Saul because Saul had been anointed by God to be king. And anyone who “stretches forth their hand against the Lord’s anointed” shall not be guiltless. 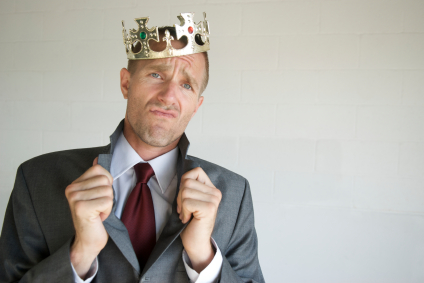 It’s worth noting that Pentecostal preachers are routinely compared to the Old Testament kings. That’s truly how they see themselves – anointed of God for leadership over the people. And speaking against them is routinely compared to what David didn’t do to Saul. Only in American Fundamentalist Christianity is speaking against someone the same level of persecution as physical harm. OH, unless of course it’s a Christian speaking against/ threatening a non-Christian. Christians telling non-Christians they are targets for the Wrath of God might sound stronger and more hateful to you and me than pointing out falsehoods, but no. When a Christian says these things not only is it not a threat (according to my reader, see below) but in general they’re just “practicing religious freedom.”

But what is this guy threatening me with? Well, the first story he references – Numbers 12:1-13 What happened to miriam for speaking against Moses.? – goes like this. Moses had married a “Cushite” or Ethiopian woman. So his brother Aaron and his sister Miriam start grumbling about him. Basically they both were saying, “Hasn’t God spoken through us, too? Why is our brother so special?” So God comes down and says (literally)  “Come out to the tent of meeting, all three of you.” I love that line, it sounds just like a parent who’s had enough of the bickering.

Except God’s really only mad at Miriam, because she’s the only one he punishes. Typical. Suddenly she’s stricken with leprosy. Moses and Aaron both freak out and beg God to spare her. God relents, but only after Miriam serves a 7 day Time Out – “confined outside the camp for 7 days.” Yeah, her “loving father” literally locked her outside for a whole week with a deadly disease for grumbling with one brother (who went unpunished) about her other brother.

So, Threat #1: I’m going to be stricken with some deadly disease and/or sent to Time Out.

The next story is about Kora. He led a rebellion against Moses by bringing about 250 men before him and saying, “You have gone too far! The whole community is holy, every one of them, and the Lord is with them. Why then do you set yourselves above the Lord’s assembly?” (Numbers 16:3 NIV)

There is a whole chapter of arguing after this, but the upshot is this: The earth opens up and swallows Kora and his accomplices and their entire families. Yikes.

So, Threat #2: The earth is going to swallow up me and my entire family.

Finally, “it would have been better to never have known my word” .. this is a reference to 2 Peter 2:21, which has lots of images of dogs returning to vomit and pigs returning to mire after being cleaned. It’s meant to just be vaguely ominous.

So, Threat #3: General ominous bad things. My life is just going to go downhill from here.

“But My Intention Wasn’t To Threaten You”

The rest of the conversation, in its entirety with no edits (his name will be left out), went like this:

Pentecostal To Pagan
I plainly put forth the evidence that Reverend Stoneking is in fact not telling the truth. If you can’t be objective at least keep your old testament threats to yourself.

Reader:
My purpose was to point out to you scriptur not to make you feel threatened in any way or form.

Pentecostal To Pagan
Right. He and all his family were swallowed by the earth… then you say it would be better for me never to have known… sounds pretty threatening to me.

Pentecostal To Pagan
Scaring me is exactly your intention. You’re no different than some Mafia hood threatening someone for snitching to the cops.. but instead of “Vinnie” you’re threatening me with your god. Not gonna work.

Pentecostal To Pagan
There is a difference between being criticized and being threatened. If you can dispute what I wrote bring it but don’t tell me calamity is to befall me and my family for pointing out things your star preacher is lying about. HE also needs to be ready to be criticized.

Reader:
What happened?werew you hurt by some in the upc or are you mad at the upc?

Pentecostal To Pagan
It’s all on the blog. Read it. I don’t owe you any explanations.

Reader:
Ok well this will be the last you hear from me.sorry if I offended you or made you feel threatened.

Pentecostal To Pagan
I doubt you’re truly sorry but appreciate the attempted apology. Have a nice night.

There’s so much here. As I mentioned above, speaking against a preacher is the same as attempting to murder them as far as Divine Retribution is concerned, but as a writer I should be expecting “criticism.” Stoneking, of course, is above “criticism,” even when he is demonstrably lying.

Notice the go-to question about how I came to be in such a state: What happened? Did you get hurt or are you mad? Kinda reminds me of an article I’ve written entitled appropriately enough, “Am I Angry Or In Rebellion?” The same thing covered in “People Backslide For Very Good Reasons.” No, I didn’t leave the UPC because someone hurt my feelings. I made a conscious decision based on teachings I could no longer accept.

Bullying Is Bullying And Threats Are Threats

But the bottom line to me is that the original message CLEARLY was meant to put the “fear of God” into me. I was supposed to be frightened because I have dared speak against a Pentecostal Preacher. I have gone so far as to point out lies this man has told. I should therefore be shaking in my shoes because God will not tolerate such behavior.

That this god would punish me for pointing out provable lies – while the liar is considered above reproach – is just more evidence that this is not the god for me. But of course, this is the same god who gave Miriam leprosy and made her stay outside the safety of the camp for a whole week while doing nothing to her brother Aaron for the identical offense. So yeah, between me and Stoneking this god probably would side with Stoneking since not only am I just a run-of-the-mill regular person, I’m FEMALE.

It also drives me batty that fundamentalist types like this reader can bully people with the bible, throwing fire and brimstone and condemnation at the likes of me, or at gays or Caitlyn Jenner, or anyone else not living up to their standards, while thoroughly believing in their warped hearts that they are doing something good. They wrap this condemnation and judgement and disapproval so thickly in language about “caring for souls” that they honestly think bullying is an act of compassion.

Well I’m here to say that it’s not. Bullying is bullying, and threats are threats. I will not be intimidated or cowed by it, and I will not put up with it. Period.