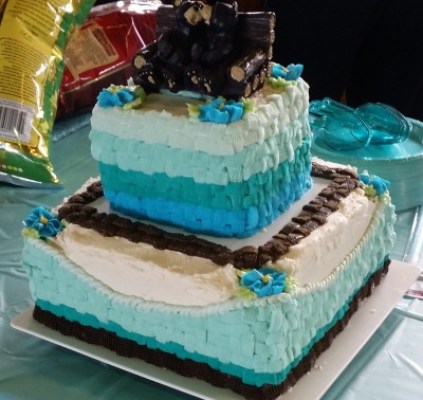 So I haven’t darkened the door of my local UPC in over two years. There’s no way I’ll ever go back. Yet for some reason, at least half of the people on my Facebook friends list were church people. They’ve been dropping off steadily over the past few months, especially since the SCOTUS ruling legalizing gay marriage and my subsequent celebrations.

But last weekend was the final nail in the coffin.

I’ve written previously about a close friend from Junior High that I reconnected with after getting away from the influence of the UPC. Well, he got married last weekend, and I not only made the cake for his wedding but was a “groomsmaid.” I was supposed to walk him down the aisle and give him away.

So I decided to make this an object lesson. When I arrived at the hotel in which I was going to make the cake, I started posting updates about said cake. Every step was posted, with a picture, and some variation of “I still have not participated in a wedding yet.” I started getting texts and private messages from people saying, what’s the non participation about? People started wondering when I was actually going to participate in this wedding. It was a lot of fun.

I got the cake done, got it to the venue and set it up. I posted the pic, and informed everyone that at this point I was free to leave without ever having contact with either of the grooms. This is in NO WAY participating in a wedding. It’s making a damn cake. Fundamentalist Christian bakers take note: Just make the damn cake, set it up and leave. Do your job and go. It’s pretty simple.

Then I posted pics of me in the wedding party, and signing the marriage certificate as a witness. THIS I informed everyone, IS participation. See the difference?

Surprise! This Didn’t Go Over Well

Needless to say this concept didn’t play well with the fundamentalist corner of my friends list. The very next morning before I’d had coffee (I really should ban myself from any type of human interaction when not properly caffeinated, virtual contact included) a former church mate that I’ve had several enjoyable, rational, civil disagreements with was posting crap about how Christian Bakers are being persecuted by the bullies in the “Gaystapo.” I couldn’t stop myself. I was literally compelled by forces outside my body (ok my own emotions) to post a calm, rational reply. But one that was still pretty hard hitting.

I said if you’re trying to be a “Christian” what do you think Jesus would do in this situation? I personally think not only would he bake the cake, he’d insist on being there to serve it and probably wash a few feet in the process. That was kinda how he rolled. But oh. Never do that to them. They handle that even less well than the idea that gay people should have rights.

They take it really, really badly.

My formerly rational church mate went ballistic. She posted that her status updates were for her FRIENDS (AKA people still drinking the Kool-Aide) and that she didn’t post her opinions all over my page. That if this is how I really felt I should un friend her and block her updates from my news feed. Well!

This bothered me more than it should, although I’d like to think that’s just because I was exhausted from the weekend. I’ve wanted to keep people from all over the spectrum on my friends list. Partially to mine some of their craziness for this blog, I’ll admit. But also because I don’t ever want to be in the situation I was in as a member of the UPC. The situation my former friend wants to keep herself in. Where all of your information comes from people who think just like you. So that your ideas and beliefs are never challenged. So that it never occurs to you that you’re living in a bubble of crazy.

These people watch only Fox News (if they watch news at all). They read only the bible or other Christian materials. They hang out only with other Christians, or if they do work around “non believers” they keep enough of a distance to ensure that if there is any influencing going on it’s decidedly one way. Three times a week they go listen to sermons and participate in rituals designed to reinforce their indoctrination. They tell themselves (or the pastor tells them) that this is to keep their mind pure, “stayed on Jesus.” But really, it’s how you become brainwashed.

This is how you wake up 20 years down the road and realize you’ve been living in a cult. IF you’re lucky enough to wake up at all.

Freeing Myself From The Crazy

But I realized that the negativity I was exposing myself to – the constant drumbeat of “we’re being persecuted! A Christian holocaust is coming! Those bully gays won’t stop until Christianity is outlawed!” – was bad for my energy. I have enough stress now that my job has picked back up and I’m working more than full time again. I don’t need this.

What just boggles my witchy little brain, however, is the fact that these people do not see how they are the ones doing the bullying. They do not see that they are causing the rest of the sane world to dislike them by their histrionics. That by trying to shove their rules down everyone else’s throats and by acting so hatefully, they’re pushing people away in droves.

Well, now they’re doing it without me for an audience. Because I completely cleaned out my friends list this week, and there’s nobody on it whom I don’t actually have something in common with. And already my little world feels like a brighter place.

4 thoughts on “Finally Cutting Ties With My Former Churchmates”