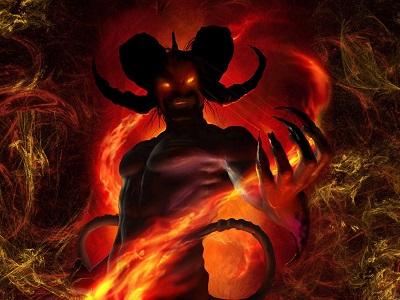 Home » My Pagan Path » No, I Do Not Worship Satan

I stumbled across a brilliant article on Patheos today. It’s a repost, but the first time I’m seeing it. The title is, “I Worship Satan And You Do Too.”

I love this article because it perfectly explains the way Evangelicals think when it comes to … well anybody but their own church-mates. As the author states, any time you mix any type of Pagan/ Wiccan/ Heathen/ Non-Christain with Christians of the Evangelical stripe you get some variation of “REPENT! You are worshiping Satan!”

Pagans often think we can reason with this, that the Christian is just misinformed. “No,” they often patiently reply. “I don’t worship Satan, I don’t even believe in such a being.”

But as the article points out:

When a Christian accuses you of worshipping Satan, the issue is not their lack of knowledge about contemporary witchcraft, Wicca, Paganism, etc. Rather, the issue is a difference of worldview.

From the perspective of this kind of conservative, Protestant Christianity (because it’s important to understand that there’s no monolithic entity called “Christianity”), the religious options are simple: Christ or Not Christ.

Everything in the “Not Christ” box is the playing field of the Enemy. There is no middle ground.

As I’ve mentioned before, there is no “live and let live” when it comes to fundamentalist Christianity. Because they hold a patent on ultimate Truth. There is only one way – the way taught in whatever church they attend – and EVERYONE else is going to Hell to burn for all eternity. If you hold any other belief, you’ve been Deceived By Satan and are, quite literally, worshiping demons. In the clutches of Satan. On your way to Hell.

Now they will differ in their response to this. Most will have some sort of visceral reaction ranging from shock to anger to indignation to occasionally compassionate pity for your state. They’ll generally have to tell you about the fact that you’re deceived and in spiritual bondage and hellbound. Here’s what the article has to say about this:

Personally, I don’t have any problem with being called Satanic. I know it’s not personal and doesn’t actually have anything to do with my Craft, my gods, or how I live my life. It’s not a particularly effective insult; why should it be offensive, unless we buy into the same paradigm? Why not turn it on its head and wear the term proudly?

Either way, as a community (or at least as an assemblage of angry people), we need to find another strategy for dealing with the whole Satan thing. Because the issue is not misunderstanding. It’s disagreement over the fundamental structure of the universe. We need another game plan aside from the dumb memes that mostly do nothing but advertise our own failure to grasp the basics of Protestantism.

Here is where I disagree with the author. Maybe its because of the 20 years I spent in a fundamentalist Christian church, and the anger I still feel toward that system as a whole for the oppression, emotional abuse and pain it caused me. But I refuse to to wear their terms, or accept their worldview in any way. I’ve been there, done that and rejected it.

I started this blog because I thought going from such a fundamentalist place to Paganism was pretty rare (I’ve since discovered it’s anything but.) I thought I was in a unique position to explain things to both sides, to translate “Fundie Speak” for the rest of the world, and to expose the Christians who will show up when I talk about Christianity to the idea that someone can make a conscious choice to follow a different path. Especially to expose some of the craziness of the denomination I came out of.

But the problem is, the people we’re talking about – the fundamentalist types – are so indoctrinated, so closed minded, that they simply cannot see past their own belief system. If we “wear the term proudly” we’re only feeding them. We’re buying into their worldview. And I think that’s dangerous. Don’t encourage them this way. Reject them outright.

It’s this “all or nothing” worldview that causes North Carolina parents to go apeshit when a 3rd grade teacher reads a story about a gay character to stop an effeminate boy from being bullied. It’s why they’re freaking out over gay marriage. It’s why disagreeing with them is a “war on Christianity.”

I don’t think that we’re advertising our own failure to grasp the basics of Protestantism. I grasp them better than many who still cling to them. I think we are – and we should continue to – reject those ideas outright.

And if posting “dumb memes” is the only way to do it without getting shouted over, then so be it.