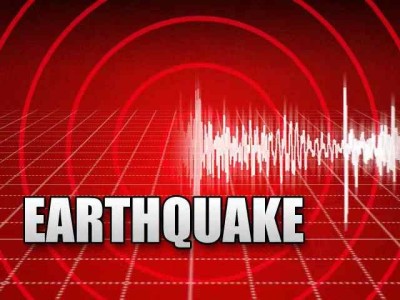 On Saturday afternoon, May 2 a magnitude 4.2 earthquake hit western Michigan. It was centered 8km south of Galesburg, outside of Kalamazoo. Earthquakes are fairly rare in Michigan, but not unheard of. In fact, this is only the second-strongest one ever recorded in that state.

About 120 or so miles to the east of the epicenter, however, there was a church service going on. And not just any church service. This was an Apostolic service! The “Prophetic Word Conference 2015” was being held at The International Church of Metro Detroit., which is a UPC church.

What exactly is a “Prophetic Word Conference?” It’s pretty much just a revival. The schedule from the 2014 version shows prayer Thursday night, one service on Friday night (Cost: $10) and 2 services on Saturday and Sunday. (Saturday night also costs $10, but not Sunday night. Probably because that’s when the regular members normally would be attending regular service and you just can’t charge admission for Sunday night service.)

So Saturday morning apparently wasn’t just any old service. It was pretty intense – I’ve talked before about the energy raised in these services. I can imagine there was a lot of it by 12:33 PM. The altar was packed, everyone was praying hard, talking in tongues and getting their Prophetic Word on. And then the building began to shake.

And these people thought they had done it.

They began tweeting as soon as church let out – these screenshots are from a website I love, spiritualabuse.org. 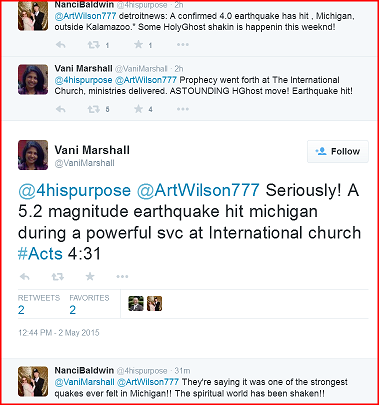 Prophecy went forth! The Holy Ghost Moved! Earthquake hit! The spiritual world has been shaken! This is JUST LIKE THE BIBLE! Just like the book of Acts, 4:31 which says:

And when they had prayed, the place was shaken where they were assembled together; and they were all filled with the Holy Ghost, and they spake the word of God with boldness.

The earthquake happened because the folks in this service prayed so hard! (So what if the epicenter was 120 miles west? Clearly it was all about THEM.)

Then Art Wilson, the senior Pastor of the host church, had this to say: 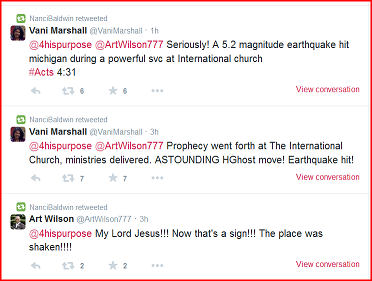 It’s a sign from God! Clearly it means that this conference, its speakers, whatever was said – all have the stamp of approval from God himself.

Tell That To The Folks In Nepal

This self-congratulating, however, came one week to the day after a devastating earthquake in Nepal. With over 8,000 people dead it’s become the deadliest natural disaster in Nepal’s history.

At best, the comments above are grossly insensitive and inappropriate. But it gets worse. You see, the earthquake in Nepal also hit at about 12:30 in the afternoon local time, on a Saturday. Saturday happens to be the day Christians have weekly church services in Nepal.

Which means that those people, too, were at the end of their church services when an earthquake hit. And hundreds of Christians died in those services. Did they pray so hard that their church buildings shook – and collapsed on them? Was this, too a sign from Art Wilson’s Lord Jesus? Were those believers so anointed in that moment that they shook the earth in their whole country? Are they, too, approved by God Himself as evidenced by this miraculous sign?

But I can almost hear the rebuttal to this line of questioning. Most of those killed were “denominal” Christians. Meaning, they weren’t fully in the “Truth” as taught by Apostolic churches. They likely weren’t baptized in the name of Jesus, or filled with the Holy Ghost with the evidence of speaking in tongues.

In other words, these weren’t “real” Christians compared to the likes of Art Wilson, Vani Marshall and our old friend Lee Stoneking (who was one of the speakers at the event in Michigan). So they don’t count. In fact, maybe it was God’s judgement on Nepal for being such a heathen nation – it is mostly Buddhist, after all.