Home » My Pagan Path » Vultures And The Morrigan

It started in January when I went to the Women’s March in Washington, and was especially strong during my trip to the beach where I met Manannan Mac Lir.

I dedicated both trips to The Morrigan, and both times saw an inordinate amount of soaring birds I assumed to be hawks. In addition to those times, any time I’ve felt particularly connected to Her or done something in Her honor, I see them. That’s ONLY when I see them.

So the sight of this huge raptor (or several of them) soaring effortlessly in the sky above me has become a sign from Herself that “I see you, and what you’re doing, and I approve.”

One of the things I do in Her honor involves someone named Max. A few weeks ago, Max noticed the bird, too. Only he insisted it wasn’t a hawk but a “turkey buzzard.”

When I got home later, much googling ensued. And I started to think that Max was right – I had been seeing Vultures (for that’s what “turkey buzzards” actually are) all this time. 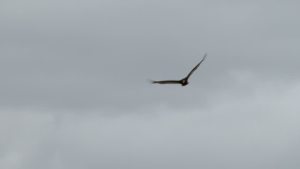 Not long after, during my morning devotions, I saw the bird.

I ran out to the driveway to get a better look, but he was up very high and heading away from me. I asked Her to have him fly back and give me a better look so I could be sure of Her message – there’s a big difference in symbolism between hawks and vultures.

Within minutes two of the birds were circling low overhead. And they were without a doubt Turkey Vultures.

But Are Vultures Connected To The Morrigan?

At this point I had what we Pagans call UPG – Unverified Personal Gnosis. But I want to keep my faith grounded in as much verifiable information as possible – otherwise faith can become an exercise in imagination alone.

In one Facebook group dedicated to Her, I had a handful of people agree that they, too, see vultures in connection with Her. So that’s one checkmark – it’s not just me. 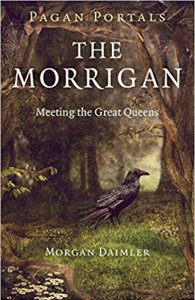 In the Irish Magic & Spirituality group hosted by the amazing Lora O’Brien, I asked the group about the possible connection. Is there any mention in the Lore, or have any artifacts been found that could back this idea up? Morgan Daimler (Preeminent expert and author of Pagan Portals: The Morrigan – which I highly recommend – it can be purchased by clicking the image at right) responded that Vultures don’t exist in Ireland. There are only crows and ravens – this was backed up by several other group members. Plus, there have never been images of the Morrigan found on the island.

So there doesn’t seem to be an historical connection, at least in Ireland itself. However…

On the European continent, there are “cognate” or similar Goddesses – War Goddesses of other Celtic tribes that have similar attributes to The Morrigan. These Goddesses aren’t the SAME as Her – they are each unique individual deities. But as noted below, they can shed light on overall themes in Celtic patterns of religion.

And there are Vultures in Europe.

The Great Queen And Corvids In General 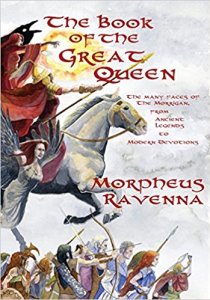 Morpheus Ravenna is the author of the ultimate authoritative book on The Morrigan, The Book of the Great Queen. (Again, can’t recommend highly enough – click on image at right to purchase.)

In her chapter on Badb, one of the Goddesses who are considered “part of” The Morrigan or at least one of Her sisters, Ravenna says,

The name Badb is from the Irish word badb, generally translated as “crow”, though its meaning and usage in ancient times with reference to birds was generally less specific and could indicate any carrion bird (crow, raven, or vulture), or occasionally even a bird of prey.

Ravenna also discusses Celtic temples found in Europe. While they don’t directly represent The Morrigan, they “may illuminate something of broader Celtic patterns of religion as pertaining to deities of war and sovereignty.” She notes that temples in Gaul and Celtiberia contain images of carrion birds that could be vultures attending to the warrior dead. (Book of the Great Queen, p. 202)

Best of all, Ms. Ravenna personally responded to my question in the Irish Spirituality group. In part, she says,

…in Irish tradition it’s mainly crows and ravens that would be associated with the Morrígan, but in places where there are vultures, vultures can occupy the same role both ecologically and spiritually.

I have had signs and communications with the Morrígan involving vultures myself – the area where I grew up and lived in my early adulthood had a lot more vultures than corvids. It’s a thing. She’ll make use of whatever’s in the environment and the relationships with beings that are there.

Most followers of The Morrigan will tell you She uses crows to communicate. And since I’ve been following Her, I definitely have more crows in my life. Everywhere I go, as soon as I step out of my car I almost always hear at least one cawing at me to say “Hi.”

But clearly, She’s not a one-bird Goddess. So if you’re a follower of Hers and you’re seeing a lot of Vultures then listen up – the Great Queen is, indeed speaking to you.