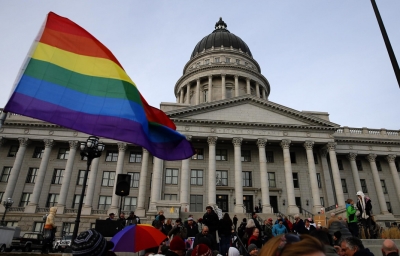 The Right Wing is forever saying that the definition of marriage has been the same for “millennia” and therefore should not change now. But has it?

Even some Supreme Court Justices are feeling the weight of history:

“The word that keeps coming back to me in this case is millennia,” said Justice Anthony M. Kennedy, widely considered the swing vote.

“Every definition that I looked up, prior to about a dozen years ago, defined marriage as unity between a man and a woman as husband and wife,” said Chief Justice John G. Roberts Jr.

“As far as I’m aware, until the end of the 20th century, there never was a nation or a culture that recognized marriage between two people of the same sex,” Justice Samuel A. Alito Jr. said.

“You’re asking us to decide it for this society when no other society until 2001 ever had it,” added Justice Antonin Scalia.

Since the dawn of time, marriage has indeed been between men and women. (Those who claim it’s always been between “one man and one woman” clearly haven’t read their Bibles. How many wives did Jacob have? David? Solomon? I could go on but you get the point.) But for all of that time, no matter how many women were involved in the marriage, those women were subjugated.

According to Sir William Blackstone, an eighteenth century English jurist whose works are still frequently cited today to explain the common law principles we inherited from our former colonial rulers, “[t]he very being or legal existence of the woman is suspended during the marriage, or at least is incorporated and consolidated into that of the husband; under whose wing, protection and cover, she performs everything.”

For “millennia” women didn’t control their own money – any inheritance she got was controlled by the husband. She couldn’t own her own property. She had nowhere to turn if he was abusive, or even if he raped her. In fact, the idea that a man even COULD rape his wife was never even considered as she had no right of refusal. She had no rights, period.

But that has, thankfully, changed in recent decades. Today, women are equal partners (at least legally) in marriage. She makes her own decisions, controls her own money, and can even (gasp) say no to sex and have that refusal honored. (Nobody can stop her spouse from pouting, but that’s not a legal matter.)

So the idea that marriage “hasn’t changed for millennia” is a crock. It’s already a completely different relationship than it was for all that time and quite frankly allowing two men or two women to enter into it isn’t even AS drastic a change as the status of women has been.

I know, because when I first got married my husband thought the old way. Now I can’t say that he was tyrranical or physically abusive. But he damn sure thought he was the boss and I should do whatever he said. In the very early days of our marriage I remember discussing the fact that I could legally sign his name to checks to cash them (to me, this was convenient so we didn’t both have to go to the bank – it was a joint account, after all). His reply? “That’s not your place!”

The hell it isn’t, buster.

I was told quite often over the years that no matter how much weight he gained, or how bad his hygiene might be at any given time, I should NEVER say no to sex. That’s against the Bible. When money was tight and we were struggling to pay bills, it was hugely important for me that the bill for our kid’s private school was kept up. He wanted to put at least one in public school. I replied, “I will turn tricks if I have to! That is how important this is to me that they BOTH stay in the private school.”

So what did he do? He made the executive decision that the school bill just wouldn’t be paid and didn’t feel obligated to tell me. When the kids both got kicked out of the school, and were left with no option but public school (one of our children is special needs, and our local school system is one of the sorriest in the country) I was told that the decision was his as head of the household and that was that.

The hell it is, buster.

Today, the marriage (tho shaky) is not so one-sided. And after 3 years of me being a de-facto single parent while he works overseas, there’s no way in hell it will go back to the old way. Not sure how long the whole thing will last once he comes home for good and he has to live with an independent woman. I’ll keep you posted.

Justice Roberts And The Scary Question

So arguments are proceeding on Tuesday when Justice Roberts dropped a hand grenade in the small bathroom. (That is a quote from a UPC superstar Pastor, Jeff Arnold, that used to get quoted around my household a lot. Old habits die hard.) His question:

“Counsel, I’m not sure it’s necessary to get into sexual orientation to resolve the case,” Roberts said. “I mean, if Sue loves Joe and Tom loves Joe, Sue can marry him and Tom can’t. And the difference is based upon their different sex. Why isn’t that a straightforward question of sexual discrimination?”

You see, if Marriage Equality is based on gender discrimination instead of sexual orientation, then it’s an easier win. And clearly, it is. Obviously it would be nicer if we could get sweeping equal rights for the LGBTQ community, which is why this argument hasn’t gotten the focus that discrimination via sexual orientation has. But really… if Joe and Tom are straight, they still can’t marry each other under these laws. It’s only their gender that is prohibiting them from marrying each other, not their sexual orientation.

And gender discrimination is a long established no-no. In fact, many believe Justice Roberts has found a way to vote for Marriage Equality without going so far as finding wholesale rights for LGBTQ people:

University of Chicago law professor Mary Anne Case — a leading proponent of the gender argument — thought Roberts’ question suggested that the lawyerly and careful justice may have found a way to support same-sex marriage without venturing into the uncharted waters of finding a fundamental right for gay people to marry.

“Sex discrimination is a simple, clean, established, ordinary, doctrinal way under ordinary law of shutting down bans on same-sex marriage, but not opening up all these kinds of messy questions about polygamy and incest and all these other more complicated and problematic forms of marriage that keep getting raised by opponents to same sex marriage,” Case said.

So there you have it. The definition of marriage we’ve had for millennia is already gone. And it sounds like it’s about to change even more.