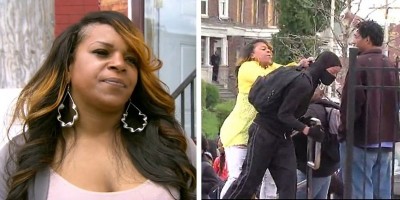 I was still a Christian Conservative in 2008 when Barack Obama was elected. I was a political junkie who got all my information from the DrudgeReport, Brietbart, Fox News and especially Rush Limbaugh. It broke my heart that after 8 years of what I thought was a president who started off well but veered too far to the left (yeah, I know…) the country was basically making a mad dash for socialism. (I never gave two shits what color he is. I’d have voted for a Conservative African American in a heartbeat.)

So the morning after election day, I tuned out.

As I look back on it now, that tuning out has been a mixed blessing. It was no doubt necessary to get Rush and Sean and all the other arch conservatives out of my ear so that I could begin to think for myself. But today, as I am only gingerly beginning to pay attention again from a wholly different perspective, I’m still a lot out of touch. I still don’t watch the news at night because I will get too upset – only now I’ll get upset from different angles.

So mostly I get news from my Facebook feed. I am completely aware that it is woefully incomplete but just haven’t made myself ready to dive completely back in yet. One advantage this does give me is that I can objectively notice at what points things become meaningful to the people I am “friends” with.

Absolutely no one on my feed shared a single story about the death of Freddie Gray. Not one. (In fact, they still haven’t – I’ve only pieced together what happened from details buried in other stories.) So in my isolated position, I had no idea anything had happened until I saw there were riots going on in Baltimore.

Because it was only when a community turned violent and property began being destroyed that anyone I know seemed to care.

Unlike me, many of the people in my Facebook circle are still political junkies. If it was portrayed in the media at all (and I honestly don’t know if it made national news before the riots or not) they would have seen it. But that wasn’t important enough for them to share. The only thing that they thought was important was that those “stupid thugs in Baltimore are burning down their own neighborhood.” No, stupid isn’t even a good enough word. Lets label them TERRORISTS: 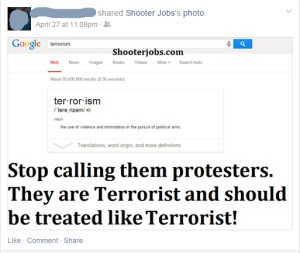 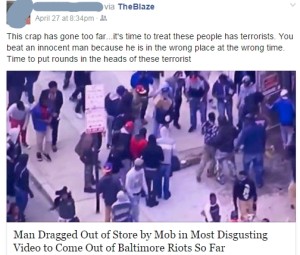 Still not a word about the death of Freddie Gray. Just lots of hate and disgust for the protesters – let’s put rounds in their heads!! (No racism there! Of course not. These are good Christian folks!) Then, Toya Graham drug her sun out of the melee on live TV. I must have seen her video over a dozen times in my feed and everyone thinks she is so awesome. Here are some of the comments from one of the postings: 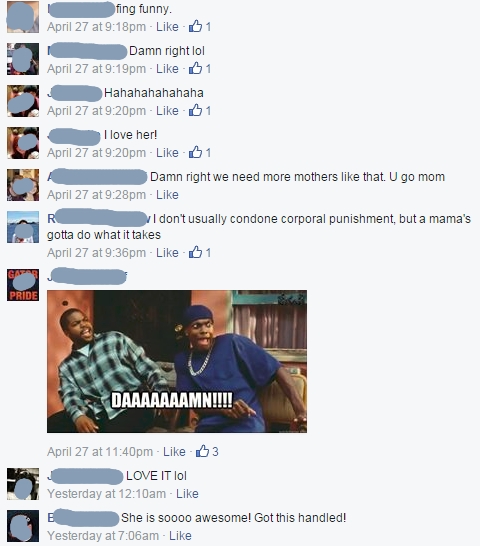 As I’m sure you can see from these comments, these folks were gleefully excited to see Toya give her son the smackdown. They love Toya – everybody does.

And of course I get choked up watching her. I can only imagine how I’d feel if I saw my child in that environment. I can TOTALLY see me grabbing him by the nape of the neck and smacking him around if necessary to get him out of the situation.

I’m not black, but I am Southern. I was raised by parents who’d make me go cut my own switch out of the tree so they could put stripes on my legs when I was bad. I don’t see anything wrong with what Graham did here, corporal punishment wise. I know there are some who do, but I don’t see anything wrong with the occasional swat on the behind. Or in this case, a few about the head.

In her mind, she was doing what she had to do to get him out of danger.

That’s partially where my “friends” are coming from. But now that I have some distance, I see what all they’re really saying. These people aren’t happy that this Mama Bear rescued her cub and kept him safe (which is what Graham has said in interviews was her motive – not so much that she disapproved of the riots themselves). Nope.

They are happy to gleefully watch this (in their minds) little thug brat get what they think he has coming to him. That’s why they love her, because she’s doing what they wish they could do to her son.

And they unanimously think that Toya Graham was beating on her son because she didn’t approve of the rioting. But Ms. Graham has indicated otherwise:

“That’s my only son and I don’t want him to be a Freddie Gray,” Graham told CBS. “Two wrongs don’t make a right, and at the end of the day I just wanted to make sure I had gotten my son home.”

I Will Never Understand

I am White, and I live in a fairly decent neighborhood. We have our share of break-ins, but I don’t feel unsafe. I cannot fathom what it’s like to grow up as a Black inner-city youth who feels no hope. Who feels trapped. Who has to see people he may know treated so horribly following what should have been a simple arrest that they wind up dead. I will not remotely understand what leads to the violence we’ve seen in Baltimore this week.

But one thing I’m not going to do is heap condemnation upon them like my counterparts in the Church. I don’t personally see how it accomplishes anything to burn down your own city, but then again I’ve not walked so much as a step in their shoes. I don’t know if perhaps they feel that nothing IS going to make a difference so why not just vent your frustration and rage?

White America wants them to protest peacefully. Wants to tell them how to respond to their hurt and anger. Well I think that’s rather arrogant, don’t you?

Meanwhile, Toya Graham – who would otherwise be labeled by these same people as a “Welfare Queen” because she is a single mother of 6 who recently lost her job – is their new hero because she smacked her son around on live TV. Not because she agrees with the Right in their disgust for the rioting. But because as a Mama she wanted to keep her son safe. She didn’t want him to become a Freddie Gray.

Ms. Graham is loved by the Christian Right not for saving her son, but for smacking him around on their behalf. Its that simple.