My Facebook feed has been so full of potential topics the last week or so I can barely keep up.

This gem was shared by a young mother of 3 who grew up (and is still a member) in the UPC. While the article’s author is not Pentecostal (he’s actually Independent Fundamental Baptist – which I think means just as legalistic when it comes to what people should wear what activities they can participate in without the tongue-talking and exuberant worship) he hits some of the same points.

The article is titled, “PANTS ON FEMALES – Is there more to the issue?” and it opens with:

Same-sex marriage, mothers no longer working in the home, families going their separate ways with no time together, the feminization of men, the masculinization of women. These are the things I see as I look out over the landscape of our country. I find myself asking, “Where has manhood gone?” and “Where has femininity gone?”

Notice the definition of moral decay in America. Of course, same-sex marriage is an ongoing struggle with these people and they’ll continue to be offended by it for a long time to come. But even a woman having a job outside the home is a crying shame! She should obviously be home, in the kitchen, baking cookies and waiting on her Man hand and foot. She should be a dainty little thing that squeals at spiders and lets her big strong man take care of all the difficult tasks.

The article’s author (a Dr. Bob Gray Sr.) repeatedly asks whether or not it matters if women/girls dress like men/boys and vice versa. He mentions Deuteronomy 22:5 (“The woman shall not wear that which pertaineth unto a man, neither shall a man put on a woman’s garment: for all that do so are abomination unto the Lord thy God.”) four separate times, and ponders whether or not ignoring that principle has led to the current state of moral decay in America.

According to Dr. Gray:

If you are an honest person you will have to admit that females in public have taken the half off sale seriously. Hip hugging skinny jeans revealing mid riffs. I travel every week of the world [ sic ] around this great nation of ours. It is embarrassing for a man who is doing the best he can to keep his heart right with all of the female flesh on display… The Mrs. Cleaver look was in almost every home in 1950’s.   Not so in either the home or the house of God, in a lot of cases, in this new Millennium.

I have to admit that at this point in my life this line of thinking infuriates me. Why the hell is it my responsibility as a woman to make it easy for you as a man to keep your “heart pure?” Because it’s always the woman’s fault to these people.

It’s this logic that leads inevitably to asking a rape victim, “Well, what were you wearing?” They might as well ask us to wear a burka.

Participating In Your Own Subjugation

Did I mention that this article was shared by a female friend? It really bothers me that women in these types of churches support this thinking without realizing that they’re contributing to their own subjugation. I remember those days vividly. My husband and I took our kids to visit relatives of mine in Florida once, and while we were there went to Disney. At one point my aunt and I were by ourselves on a merry-go-round while he and the kids rode something else. She mentioned that my husband didn’t seem to have a problem with the fact that she was wearing shorts. He only wanted to make ME wear dresses in the heat. 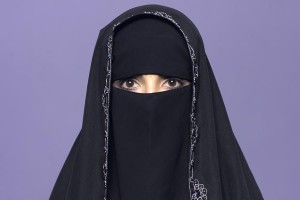 Because at that time I truly felt like this was my own conviction. That I was wearing what God wanted me to wear and it was my very own choice to make Jesus happy. But even then, I taught Sunday School. I sang in the Choir. My participation in those areas would have ended had I been seen wearing pants in public. Every year I had to sign my agreement to the list of rules that included no pants, no makeup, no jewelry, no cutting my hair. Signing that document was required for me to participate in any church ministry.

And since I was not yet working outside the home – a situation that contributed to years of clinical depression for me – participating in church was all I had.

At the time, it didn’t make me feel subjugated. on the contrary, it made me feel superior. I was too busy looking out at the pants-wearing hussies in the rest of the world and believing my skirts made me holier. Because that is what I was told every week. Holy. Closer to God. Special.

That’s how these “standards” are spun in these churches. By subtly playing on our pride, the male leadership convinces us that we women are up on some pedestal. We’re being kept safe, and being “set apart” for the “glory of God.”

But as African Americans in the 20th century could attest, “separate” never means “equal.” It always means second class. 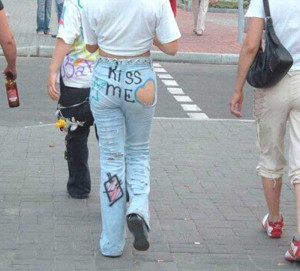 I first started wearing pants when travelling for my job. That way nobody from church could see me. Over time I eventually began wearing them around town while my husband was overseas for work. If I saw church people and I had pants on, I’d avoid them.

It felt so liberating to have on a pair of jeans! So much more comfortable, so much more in tune with my personality. I began wearing them more and more, until finally I didn’t care who saw me. I even met my husband at the airport wearing them when he came home on vacation.

Today, I almost NEVER wear a skirt. I know lots of Pagan women do, and I like the boho/hippy look I see many of them wear. But 20 years of skirts was enough for me. It will be quite a while before I begin mixing them back into my wardrobe. And then it will only be because I damn well want to.

So yes, Dr Gray. Count me in as contributing to the moral decay in America. Especially if that decline is defined as marriage equality, the right of women to choose to have a career, and to be strong and independent. If that’s what my jeans are doing for this country, then I’m all for it.