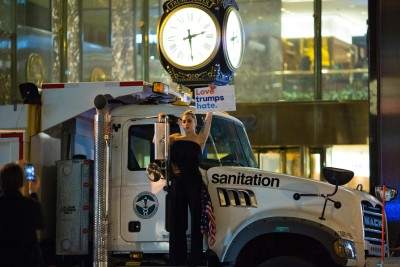 In less than 48 hours since the election of Donald Trump, people all over the country have experienced racial aggression and harassment not seen in years.

After a campaign that stoked the worst in America – going past dog whistles to outright embracing racism – it was no surprise that white supremacists loved Donald Trump. What may have been surprising was the fact that Trump himself did nothing to discourage this admiration. And now that he’s been elected, the most ugly among us feel vindicated. Emboldened.

And they’re making sure people of color, LGBTQ folks and all women are well aware of their newfound freedom.

Here in North Carolina, a gay couple found a note on their car that says, “Can’t wait until your ‘marriage’ is overturned by a real president. Gay families = burn in Hell. Trump 2016.”

In San Francisco, a woman woke up to find her SUV spray painted with “Trump Rules” and “Black bitch.” 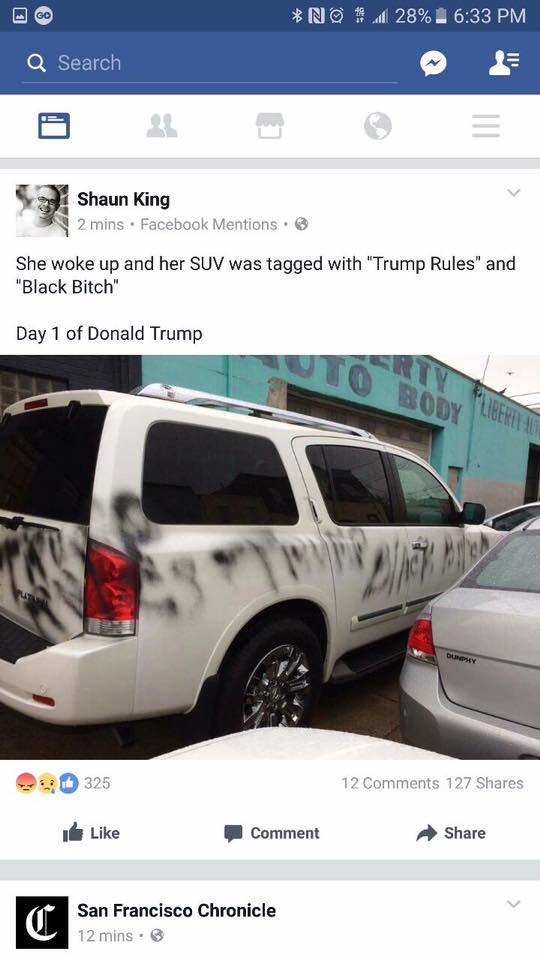 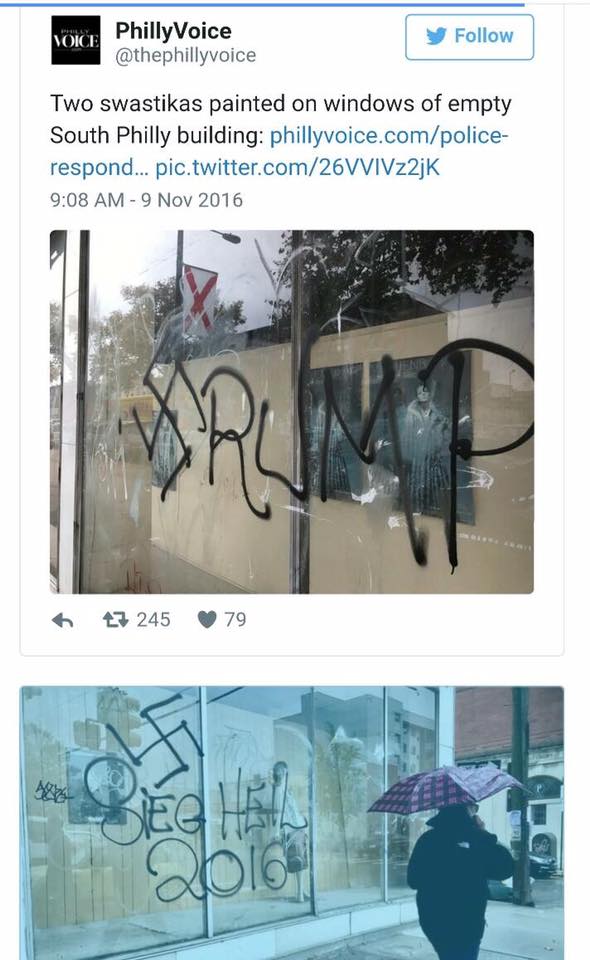 In Bloomington, Indiana a woman was leaving her job when men in a truck rode by and yelled, “Fuck you, n***er bitch! Trump is going to deport you back to Africa.”

Twitter reports abound of more deplorable taunts to women and minorities. These are far from isolated incidents.

Meanwhile, again here in North Carolina, the KKK is legitimately planning a victory parade for Trump.

Into this toxic stew, people across the nation took to the streets to protest, to proclaim Donald Trump is “Not my president.” Obviously they know he, in reality, is going to be the president of the United States. These protests are more about telling the people above, and all others who feel threatened right now, that not everyone hates them. Not everyone is a threat. Some of us have your back.

So imagine my surprise today when my very own formerly-known-as-sweet Mother In Law shared the following to Facebook: 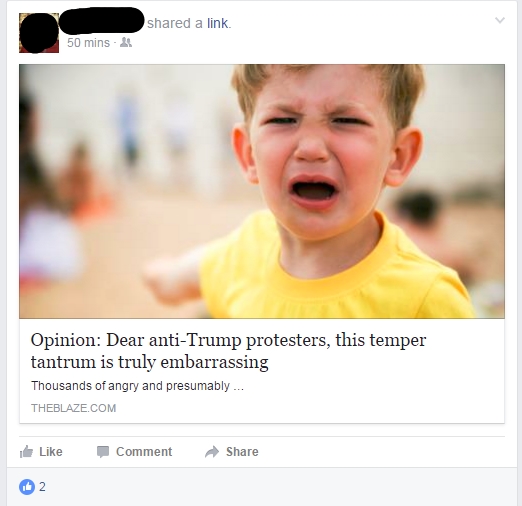 The article it links to is beyond toxic:

Thousands of angry and presumably unemployed people across the country have taken to the streets. They’re marching, as you’ve probably heard, in protest of Donald Trump’s victory. Nobody is quite sure what’s accomplished by protesting the legitimate result of a free and fair election — least of all do the protesters themselves understand their own purpose — but they march on anyway. As is often the case with these left wing demonstrations, it’s more about venting confused frustration than accomplishing anything of substance or communicating any kind of coherent message.

I continue to beseech the good Lord that He give me the grace not to laugh at these people, but, man, do they make it hard.

As leftists weep, wail, and accuse 60 million American men and women of misogyny, the rest of us can only conclude that, truly, this defeat could not have happened to a more deserving bunch. More evidence: two protesters in Oakland last night explained to a CNN reporter that they’re tired of the “broke ass” people in middle America who “give them sh*t about their values.” One said she had to flee the Midwest in order to be around “open minds” and “diversity.” Another agreed, adding that the rest of the country “needs to adopt” her “environmental values.” You see, they value open minds and diversity so much that they wish to mandate their opinions nationwide. And they’re so fed up with Hatred and Bigotry that they just need to lash out at all of the dumb, poor, ugly rednecks who live between the coasts.

Again, how does a person keep from laughing at this nonsense?

How does one call themselves a Christian and laugh at the idea of protecting vulnerable people from attack? And what would Jesus think of the smug, condescending – downright hateful – attitude on display here?

I’m about over this bullshit. I’m not going to accept this without a reply anymore just to keep “family peace.”  Not saying anything when this nonsense is spouted is what has allowed white people in this country to pretend it isn’t as bad as people of color know it is, and that has allowed it to continue to fester. We can’t ignore it.

My mother in law may never speak to me again, but I did say what I thought. My upcoming holiday season should be nice and quiet.