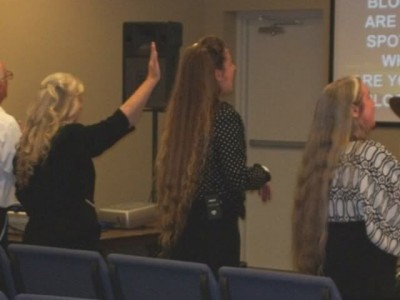 This is the second article discussing how the United Pentecostal Church and it’s teachings caused trauma in my life. I’m laying bare these old injuries in an effort to understand, and hopefully, heal from them. You can read about what caused this need here.

The question, in its incredulous tone, cut deeper because it came from a guy I’d once had a crush on. Today, Feminist Me would possibly snap back that I don’t exist in the world to be pleasing to your eyes, but back then I was a 22 year old girl with truckloads of insecurity. I had been attending the local United Pentecostal Church for a few short months, and finally bowed to the pressure to stop wearing makeup.

Makeup had been my very last worldly stronghold. Switching from pants to skirts wasn’t a huge deal – even though many people around me voiced disapproval, and I’d spent money I didn’t really have to revamp my wardrobe. Jewelry came off fairly easily, too. As much as I’d enjoyed wearing jewelry – often a lot of big, clunky pieces – the absence of it wasn’t an obviously defining look. And while I had decided not to cut my hair anymore, it would be months or even years before it grew out enough for that choice to become obvious.

Going without makeup was an entirely different story.

All of my life I suffered from something called “allergenic shiners.” Dark circles around my eyes that can be anywhere from mild to “Who punched you?” depending on how inflamed my allergies are at any given time. These circles made me super self conscious, and most of my teen years were spent trying to find the right amount of concealer to make me look normal.

Here’s what they look like as I’m writing this – this is on the milder side: 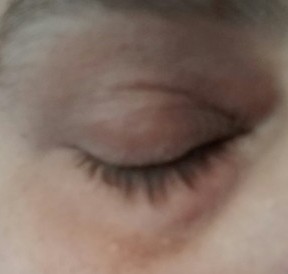 Taking away the option to cover these circles did more to me than telling me I couldn’t wear pants or jewelry. Those were subtle methods of control, subtle ways of stripping away my agency and individualism and forcing me into an “acceptable” mold. But stripping the covering off of my ugly circles told me in no uncertain terms that feeling good about myself was ungodly. God Himself meant for me to look like I was ill or hadn’t slept in a week, and He doesn’t make mistakes. Covering up those circles insinuated that He did, and was an insult to His very Benevolence.

The Psychological Effect Of These Changes

In this society, women are judged on our appearance. It’s wrong and unjust, but that doesn’t make it any less true.

Joining a cult like the UPC is a huge life change, especially if you’ve not been involved in any type of church prior to this. As you’re making this life change, as a woman you are also stripped of control over the very thing that this society uses to judge you. Your appearance must begin to conform to the rules of the church. The overall effect of all of this change impacts you on a very deep psychological level – so deep you may not consciously realize it at the time.

While you’re in this state, you’re not only listening to 3 sermons a week that reinforce what’s happening to you, you’re likely also being set up with someone to “disciple” you and teach you a weekly bible study. You’re encouraged to start cutting off friends who won’t accept your invitations to join you in your new church, or at least pull back temporarily until you’re “stronger in the Lord.” These people can’t be trusted because Satan will use them to pull you away from God. They aren’t “in the Truth” and so anything they say is suspect, discounted. And you’re to avoid TV and all “worldly” music and media for the same reasons.

In my case the person discipling me was an older lady I’d met prior to joining at a local political meeting. She quickly became the only person I felt safe in confiding in. She was the one who insisted that God meant for the world to see my dark circles. I spent hours and hours with her outside of church services, being taught what God expected of me.

If you add all of the above together, they’re classic (and powerful) brainwashing techniques. You’re torn down in order to be built back up in the image of the cult. Every step you take down this path further cements your identity as a cult member. Because you’ve sacrificed so much of yourself – turning back would be admitting those sacrifices were in vain. And that’s something psychologically very difficult for humans to do.

I was far enough along this path that when I heard the pastor say that the brand-new Clinton administration (this was early 1993) was ungodly specifically because “He’s putting so many women in positions of power,” I chose to ignore it and many other red flags.

By that fall, when my boyfriend (who was in charge of bringing kids to Sunday School on a bus) kicked me out of meetings with other Sunday School-related leaders (all male of course) I got mad but didn’t break up with him. By the time we got married, I insisted that his name go before mine on the printed napkins because it wasn’t a woman’s place to go before a man, even though the bride’s name is expected to be first.

When a female visitor danced lewdly in altar call one night, my “discipler” and I stood in front of her so that the ministers on the platform would be shielded from the sight and “protected from temptation.” I never wore skirts shorter than mid-calf, sleeves shorter than my elbows, or allowed any cleavage to show for the same reason. I didn’t want to be responsible, you see, for some man’s sin.

The Pedestal Is A Gilded Cage

In marriage counseling before the wedding, the pastor told us that the husband is supposed to be the leader and the wife is supposed to submit to him. In my mind that meant a partnership that was 51/49. In my husband’s mind it was “I’m the authority.” He was told that the husband is to be the “source” for his wife. The source of her strength, her guidance, and her spiritual understandings.

Meanwhile I was told that God had placed me, as a woman, on a pedestal. I dressed differently than “the world” because I was more precious to Him. He wanted me to stand out, to be a beacon to all those lost sinners who’s pride wouldn’t let them give up their worldly attire. If I looked unattractive to them, so much the better. I was morally superior anyway.

It took a long time to realize that the pedestal is actually a gilded cage.

For nearly 20 years I stuffed feelings of inferiority, ignored the part of me that felt ugly and unworthy because I had to fit this mold. I tried to convince myself that this made me a better Christian. Superior instead of inferior.

But it never really worked. My wedding pictures made me cry – not from happiness, but because I looked ugly. Year after year, I avoided being in the pictures of my kids birthday parties because seeing them made me feel like a monster. And since food is the only vice acceptable in the UPC, I gained a lot of weight as well. Needless to say this didn’t help matters.

Sometime in the middle of all of this, out on a date night with my husband (we’d gone to a bookstore for coffee where I’d seen fashion magazines on the shelf) I mentioned that I really wished I could wear just a little makeup. His response was to say in a panicked voice that he’d be happy to call the pastor – at nearly 11:00 at night – and go for counseling right then. This was a sign of just how freaked out he was as he’d never allowed me to speak directly to the pastor about questions before. Asking anyone besides him would be a sign that he wasn’t doing his job as my spiritual leader. That night the bars of my golden cage seemed a lot tighter.

His Sin, My Responsibility

Again, since I’m anonymous on this blog I’m going to get really personal.

After years of marital problems (some of which were that I wanted sex more often than him, and my drive “overwhelmed” him) I stopped wanting it. You can only take so much rejection before it has an effect on an already fragile ego. Still, I had to go through the motions as denying your spouse is a sin. (Or at least, it was when it was me turning him down. When it was the other way around, not so much.) You can only do this so long before you really begin to dread any physical contact whatsoever.

It became a huge issue because I wasn’t meeting his needs. He pouted, he had emotional outbursts. He accused me of defrauding him. And he used guilt, lots and lots of guilt. Long story short, I had to bite the bullet and put out every so often, no matter how I felt about it, or risk him leaving me. And since independence was so frowned upon, I of course did not have the financial means to support myself. I was trapped.

Some feminists would call the sex I was guilt-tripped, manipulated and blackmailed into rape. I’m still debating about that personally. As unpleasant as it was, it seems to diminish the experience of someone who was physically forced over their objections to equate the two. But I undoubtedly felt that I had no choice, and no control over my own body.

Some of the ways I was guilt-tripped included him coming and “confessing sin” to me. Sometimes it was that he couldn’t “keep thoughts pure” or that he’d had to take matters into his own hand, so to speak. Once it was “I have a problem with pornography.” Which after my tearful apology for causing such a dreadful problem turned out to be that he’d watched a few videos online. Not that he was bound by addiction or anything.

The Pattern Is Clear

When you put all of these things together, there is one overriding pattern to it all: Control of my life, my body, my appearance, my decisions, my EVERYTHING was taken away from me.  Yet I was still responsible for the sins of others. There is nothing good, benevolent or healthy about it. I was oppressed. I suffered spiritual and emotional abuse.

And that is not ok.