I grew up 30 minutes from The Cove, the “Training Center” in Asheville, NC where Billy Graham and his family lived. I have relatives that live off the same 1-40 exit you take to get there.

My paternal grandparents were the type of Southern Baptists Graham spent his lifetime trying to create. People who read from the bible and prayed together each night before bed. When I stayed with them I was often part of this circle, holding hands around their bed with heads bowed, eyes closed in silent prayer.  I remember watching Mr. Graham’s televised crusades with them – they had great respect and reverence for the man. 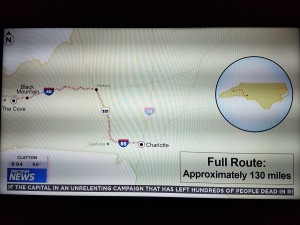 News Coverage Of The Motorcade Route. In Case You Want To Pay Your Respects.

Now, Billy Graham has passed on to the next life and the whole state of North Carolina is in a tizzy. When I turned on the news last night, they were in the middle of wall-to-wall coverage of the funeral plans. The Billy Graham Organization has a list of places you can see the motorcade with his body and pay your respects as it travels from Asheville back to Charlotte, where Graham grew up and is to be buried beside his wife. The motorcade will even pass by the place Graham attended Sunday School as a child, according to the breathless news anchor.

People in Charlotte are sorely regretting the fact that somebody scheduled a basketball tournament in the city the same weekend as the funeral, since this is a Much Bigger Deal. That fact alone should tell you about Graham’s footprint in this state – nothing else would come before our sacred basketball. (Except, of course, regulating where trans people pee.)

Not to worry, insists Charlotte PD. “We have been planning this for over a decade,” insists CMPD Chief Kerr Putney. “We knew this day would come.”

America’s Pastor Was A True Evangelical – In Every Sense

Now that he’s gone, Graham is being elevated to even greater icon status than he enjoyed in life. Tributes are pouring in, current and former Presidents are booking hotel rooms in Charlotte, and memorials are everywhere. Yessirree, Billy Graham was a Great Man and a True Christian.

And he truly was – the Christian part, anyway. An Evangelical to the core. He spent decades using fear tactics to coerce thousands to “Make decisions for Christ.” His belief that, as my former Pastor used to say, “Eternity is long and Hell is hot,” was the foundation of his ministry. And he spawned thousands of imitators, bellowing fire and brimstone across pulpits all over the world every Sunday morning.

How much trauma, then, do you suppose Billy Graham is responsible for? How many people the world over have had to grapple with the fear and psychological pain inflicted by this made-up scenario of never-ending torture? I’m certainly one. I know there are countless thousands more.

And lets not forget that at heart, Billy Graham was a bigot. In conversations with Richard Nixon in 1972, Graham insisted that Jews “are the ones putting out the pornographic stuff.” He told Nixon that while prominent Jewish people “swarm around me” because of his public stance on Israel, “But they don’t know how I really feel about what they are doing to this country.”

Graham hypocritically denied every making these remarks for nearly a decade after they were quoted – right up until tapes of the conversation were released. How very Christian of him.

He was happy to support Martin Luther King, Jr – he integrated his crusades in the late ’50’s – until King started actually doing something about Civil rights. When King’s 1963 Letter from a Birmingham Jail was published, Graham told reporters that the Baptist minister should “put the brakes on a little bit”. Afterwards he became a critic of the Civil Rights movement because it sought to “change laws instead of hearts.”

And he detested the “sin” of homosexuality. In 2012, Graham personally paid for full-page ads in newspapers across North Carolina in the lead-up to a state referendum on marriage equality. “At 93,” the ads stated, “I never thought we would have to debate the definition of marriage. The Bible is clear—God’s definition of marriage is between a man and a woman.” The referendum banning same-sex marriage was passed. To this day, Graham’s website condemns homosexuality and advocates for conversion therapy – a practice which is cruel, ineffective, and labeled a form of torture by the UN.

I mean, what – you thought the vileness that is Franklin Graham came from nowhere? He is his father’s son, after all. While their public styles may differ, the elder Graham has never publicly disagreed with his son’s polarizing statements. Probably because – as the Nixon tapes proved – he was perfectly willing to espouse one thing in public while believing something completely different at home.

So yes. Billy Graham was a true Evangelical – in every sense of the word. I can’t say I’m sorry to see him go.