Home » Trauma and Recovery » Mental Health, PTSD and The Morrigan

I’ve been in a very deep pit. Surrounded by fog and darkness, weighed down by heavy stones. According to the date of my last post, I haven’t written on this blog for nearly 3 months. Chunks of that time are completely missing from my memory.

For days on end I slept nearly round the clock, waking up in the evenings long enough to get drunk and send my husband (who works overseas) long, desperate texts that had him suggesting I check myself into the hospital. 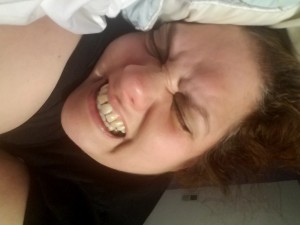 At one of my lowest points, during an anxiety attack where I just could not stop crying, I took several pictures of myself. I’m screaming and wailing in agony. I recorded the moment because I had to believe that there would be a “one day” when I was out of the pit and I could look back on the images and see what I’d made it through.

According to my Psychiatrist, I have C-PTSD. The C stands for “complex” because my trauma – which we’ve discussed quite a bit here over last while – wasn’t a one-time event, but a complex of childhood emotional abuse and neglect, combined with joining a cult that continued the tradition for most of the rest of my life so far.

And, he says, seeing my dad and the stunt he pulled at the memorial service we were at was – pardon the pun – the mother of all triggers. It was around the anniversary of several different traumas from 2016, not least of which was severing my relationship with my parents.

The Morrigan In My Darkest Hour

Some might think that a Goddes of war, who is drawn to heroes and mighty acts of valor on the battlefield, wouldn’t be much interested in someone who’s just battling to get out of bed every day. And yet…

I posted about some of my struggles in a Facebook group dedicated to Her. One after another, many other members commented that they, too, suffer from C-PTSD. Beyond this, I’ve noticed many of Her followers being open about their own issues with mental health and debilitating physical issues.

It almost seems as though She is drawn to people with these sorts of struggles.

For me, She was with me in the pit. In fact, she gave me a heads up that trouble was coming. Just before my brain seemed to shatter into a million pieces, I drove to Charlotte with my bestie for a concert. As usual, I saw lots of Vultures. Vultures normally soar gracefully on thermal updrafts – you rarely see their wings move. But on this trip, every vulture we saw was flapping it’s wings.

I knew it was a sign, but didn’t know what it meant at the time. Boy, did I find out.

She never left me in the pit, even when I was unable to keep up with my offerings and devotionals. Sometimes, when the pain and anxiety overwhelmed me, I’d offer that to Her. I figured if She fed off the tumult of battle, perhaps She could make use of the tumult inside of me. And She did.

Once, She gave me a chant to help strengthen myself:

I am the Crow
I am the Raven
I am the Vulture
I am the Daughter of the Great Queen.
I am Predator, not Prey.

During a Journey meditation, when I envisioned myself in Her cave at Oweynagat in Ireland, She showed me an image. She was cradling me – my inner child – tightly in Her crow wings as She gently carried me out of the cave. I’m no artist, so believe me when I say She had to have helped me draw this image of what I had seen:

So again – why does a Goddess of war and Sovereignty care so much about those of us who are struggling against inner turmoil?

I believe part of the answer was in Her reaction to my offering Her my pain. She did indeed come to me, and seemed to happily take it as an offering.

Today, there aren’t very many battlefields ringing with the clashing of swords and the shouting of mighty heroes. We wage war differently – and while I’m sure She’s on those battlefields as well, that’s another post for another time.

But those of us battling our own thoughts or our own bodies are waging war as well. The battle is fought minute by minute, hour by hour, day by day. It’s just as vicious as any medeival swordfest. And losing this battle is just as deadly.

I’ve made it out of the pit for now. If you’re a follower of the Great Queen, and you’re facing your own time in the dark, know that She is with you.

And no matter what deity or deities you follow, know that you, too will make it through. Just keep holding on. As long as you do, there’s always another dawn.