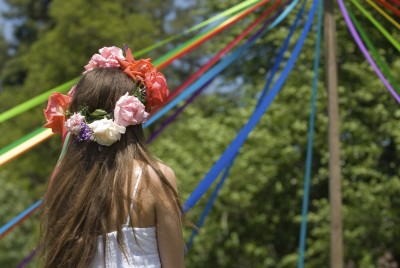 I was minding my own business this morning when this popped up in my Facebook feed: 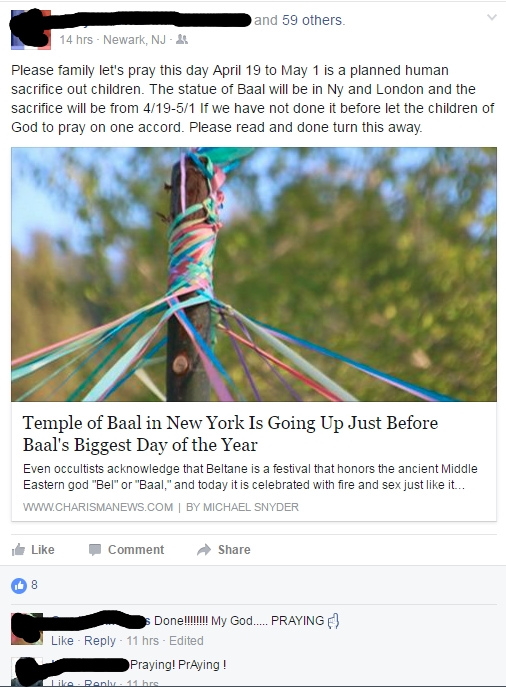 First off, I can’t believe anyone actually could believe that there is a “planned human sacrifice of our children” in this day and age. But not only does the original poster (a relative of someone on my friends list) think so, she’s got several others freaking out over it.

The article she links to in Charisma magazine is full of prejudicial errors. And the freakout factor is high. According to their “scholars” there’s a 13-day period before Beltane (which I’d never heard of) that also “requires sacrifice by fire.” And they list events in history that occurred around this time as supposed proof of some official Satanic governmental sacrifice:

But there are some authors that have written about this. This first example is an excerpt from a book titled The Most Dangerous Book in the World: 9/11 as Mass Ritual by S.K. Bain.

In case you were wondering, April 19 is a Satanic holy-day, requiring sacrifice by fire, most preferably involving the sacrifice of children, and, indeed, multiple children perished in both Waco (more than 20) and Oklahoma City (19 under the age of 6).

And this next example is an excerpt from a book entitled Phoenix Rising: The Rise and Fall of the American Republic by Donald G. Lett Jr.

In the occult April 19th begins the second highest holy day in the occult called the Beltane, which is a 13 day period which ends on May 1st. The first day of the Beltane is the most important day for human sacrifice. Even the ancient Romans honored April the 19th as the conclusion to their holiday Cerealia, the primary festival of Ceres that was accompanied by “Games of Ceres” in the Circus Maximus.

The article then lists a series of events that have occurred around April 19 (or 20th, which is apparently close enough) as proof that the dark forces in secret power in the world make some kind of big ritual sacrifice on this day: 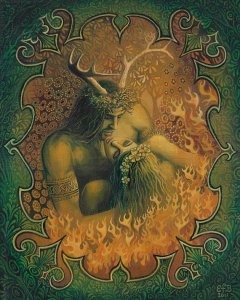 After this list, the article admits that the significance of April 19 (or 20th) is “up for debate.” But there can be no doubt about the heinousness of May 1! They claim that, “Even occultists acknowledge that Beltane is a festival that honors the ancient Middle Eastern god “Bel” or “Baal,” and today it is celebrated with fire and sex just like it was back then.”

First off, fire and sex – yep that’s exactly how I plan to celebrate. Give me a bonfire and some nookie any day! That’s what I call a HOLIDAY!! FUN.

But hello.. not every religion in the world originated in the Middle East. When I have my bonfire nookie it won’t have anything to do with Baal.. more like Cernunnos. But more importantly…

Beltane Is About Life, Not Death

To me, it takes a special kind of paranoia and disgust to turn a thousands-year-old celebration of life and fertility into something that is all about child sacrifice.

Beltane is all about life. Spring is in the air, flowers are blooming abundantly, the crops in the fields are growing. There is new life everywhere – from the livestock in the barn to the birds in the trees to the wild animals in the forest. It’s a happy time, to celebrate the return of the warmth and relative ease of summer.

And yes, its about sex. Lots of sex. Fertility, after all, starts with sex. And in cultures that didn’t make sex something shameful and dirty, sex was actually celebrated.

Why is it so easy for people to assume that non-christian religions are so depraved we want to sacrifice innocent children? I can understand when perhaps an older person who is less educated, who only gets their information from Christian “leaders” – I think of my own mother-in-law, who is sweet and naive and who believes everything that comes across the pulpit because of course “Men of God” would never lie. (Of course the opposite is true.)

Do They Know How Wrong They Are?

But what of these leaders? The person who wrote the article for Charisma did a decent bit of research. Part of the problem is that he considers the website CuttingEdge.org to be “highly respected.” When I read that I thought maybe he’s trolling. Surely he can’t mean that with a straight face. 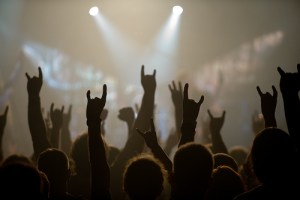 Back when I was in the UPC, we had an evangelist come preach one service. During the sermon, he was extolling the perils of rock music and especially rock concerts. He claimed that rock music (which was the exclusive territory of Satan) induced concertgoers into a trance that made them high, just as if they’d taken drugs. As someone who’d both been to concerts AND done drugs in my youth I knew this was BS. I used all the restraint I owned not to go tell the man after the service what he was doing to his credibility by making such a ridiculous claim.

The Charisma article is no different. Unfortunately, so much of Evangelical Christianity (kind of like the right-wing Republicans) are isolating themselves, and only getting information from inside their own bubble, that ever-crazier theories seem sane. And I can vouch for the fact that once you get out of the bubble, Reality seems like a foreign country at first.

But once you start getting objective information, there’s just no going back. Somehow, someway, we’ve got to pierce the bubble and get some objectivity to these people. Before they follow each other straight off a cliff.