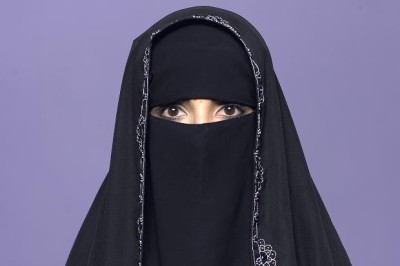 Home » Politics And Religion » The Christian Cult » Not Just Christianity: Oppression of the Hijab

No, he’s not Jon Stewart – nobody ever will be. But I’ve quite fallen for Trevor’s cool accent and innocent enthusiasm. The Daily Show is different, but that’s not necessarily bad.

That being said… I was rather disappointed as I began catching up on episodes missed while I was away for my Grandma’s funeral. First up was an interview with a Muslim researcher named Dalia Mogahed. Ms. Mogahed seems nice enough. In fact, she reminds me a lot of myself during my days of being “all-in” in the UPC.

Especially when, in the clip below, Trevor asks her why she wears a Hijab:

To me, this is exactly the same way Fundamentalist Christianity gets women to participate in their own subjugation. Ms. Mogahed believes covering her head is a sign of devotion to her god. She believes she has made this choice of her own free will, without coercion of any kind.

Well I respectfully beg to differ.

Ms. Mogahed, I believe, grew up a Muslim. Which means she was taught by her parents what is expected of a Muslim woman. What their god and their (obviously male) prophet expects from the female gender. In other words, when she was an impressionable child the idea that she should wear the hijab when she was older was imprinted on her. The Quran commands women to wear a scarf over their heads that also covers their bosom, and also a long and loose dress. Men are commanded only to lower their eyes and just not look lustfully.

These teachings are reinforced by pretty much everyone in Muslim culture. Just like women not cutting their hair is reinforced in Pentecostal culture. It’s such a part of the fabric of your experience, that you don’t quite realize the subtle pressure being exerted upon you. When you go to church, it’s preached over the pulpit. Your father, your husband, your brothers – all expect this of you.

What repercussions would Ms. Mogahed experience if she chose to take off her hijab? Only if she can honestly say there would be NONE from any authority figures in her life can she truly say she has made an independent, autonomous choice to wear it.

What Does It Say About Feminine Power?

Of course, she’s going for the answer that Trevor Noah gives her: that a woman is only strong if she’s sexy in public. She’s trying to twist the framing to make it seem that being sexy is actually oppression. I’m sure she believes (as I was told) that women who uphold such a standard of modesty are actually freer from the objectification rampant in our society.

And there is a point to be made there. When sex is the ONLY thing a woman matters for, it’s the opposite of powerful. When she’s seen as nothing but a receptacle for men’s sex and men’s seed… well then, yeah. That’s oppression on the other end of the spectrum.

But those aren’t opposite oppressions – they’re two sides of the same coin. Either way, someone else is telling a woman what to do with her sexuality. The woman isn’t in control.

A woman’s power is, whether we like it or not, tied up in her sexuality. For thousands of years, men have feared this power and sought to repress it. Whether they do so by denying it, making it shameful and covering it up, or by objectifying it and reducing her to nothing more than body parts, the result is the same.

Within us is the power to create life. To captivate our lovers in such a powerful way it can scare them to the core. The power to bear unimaginable pain, to nurture and guide. We are messy, we are wild and dark. Our depths can hold the greatest love and the greatest fury.

Denying any part of our whole selves dampens our power. The good, the bad, the sexy, the bloody, the messy… all of it together make us powerful. Our bodies are not shameful. Our sex is not shameful, and neither is our enjoyment of it. That’s a lie we’ve been told to keep us in check.

Freedom and feminine power is a woman who doesn’t give a fuck what you think. Who wears whatever the hell she wants to wear because she damn well likes it, not because she’s looking to find favor with any man. Who knows she’s sexy because SHE thinks she’s sexy. And she reveals or conceals exactly how much of that sexiness she chooses, on her own terms, regardless of the opinions or approval of anyone other than her own self.

And those women aren’t just powerful. They’re irresistible. As friends, mentors, and lovers.

If enough of us reclaim that power, we’ll take over the world.