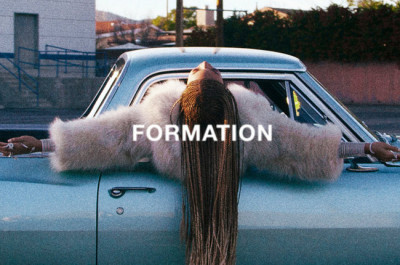 Home » My Pagan Path » The Witchy Power of Beyonce’s Formation

It’s been 3 weeks now since Beyonce broke the internet with her surprise video for and Super Bowl performance of Formation. And the shock waves continue to reverberate throughout our culture.

An atomic bomb of Black, Female, Queer and Southern empowerment, after 3 weeks of discussion there’s one more layer I want to bring out regarding this song: it’s blatant use and celebration of witchcraft.

And I feel that she’s cast a spell on me. One I am happy to embrace. Every time I hear this song I feel more powerful as a woman. I dream it, I work hard, I grind till I own it. Personally, I’ve taken a lot of flack at home for working hard at my job, for putting in a lot of hours. But I own part of the company. It hasn’t happened yet, but I, too, could be a Bill Gates in the making. That’s the kind of magic I want to work. The kind that empowers those who get it and repels and scares the hell out of those that don’t.

So let’s unpack the spell. In case you’ve been hiding under a rock for the last few weeks… well, also just because you should watch it again:

There are so many layers, so much to discuss. Where to start? 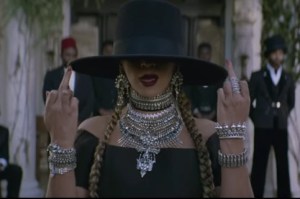 But Bey seems to masterfully understand something I learned recently from the class on Practical Magic I took: all magic is sex magic. A woman’s greatest power comes from her sexuality. And Bey is more than owning it in this song. She’s so in her power that it’s literally causing shock waves all over the country.

Bey is channeling a long line of sexual empowerment in this video.

The video’s depiction of her in early 1800s finery suggests the plaçée, as the free Afro-Creole woman in a plaçage relationship was known. Plaçage was the practice of formalized, long-term sexual relationships between free black women and wealthy white men in early New Orleans. That so many Americans elsewhere across the nation remained blind to this history partly reflected that they had no acquaintance with antebellum cities containing such a large population of free blacks. The plaçée’s free status is essential to understanding her sexuality in a non-victimized way, as Beyoncé intends. She makes the choice to exchange her sexual capital for the highest market value. (Emphasis mine)

She knows exactly what she’s doing. The practice of plaçage was responsible for quite a transfer of wealth into non-white hands. The women inherited as much as a third of the estate of her patron upon his death. Often, his children with her inherited before his fully-white children. Plaçage was ultimately empowering.

The scenes in the hallway where Beyonce and her dancers are dressed in red, are (according to the same article quoted above) a reference to Storyville, which was the Red-light district in New Orleans from 1897 – 1917:

The legendary Storyville madams are also a much better analogy for the role Beyoncé plays in American society, since their every move was documented by the paparazzi of the day and recorded in popular scandal sheets such as “The Mascot.” It’s essential to note here, too, that these black women who earned money and a degree of social power through their sexuality did not view themselves as victims. When a new ordinance sought to segregate white and black brothels in separate districts, Countess Willie Piazza — along with 11 other sex workers of color — sued and won, a rare triumph over legal segregation in the early Jim Crow period.

There’s nothing passive about the way Beyoncé displays her sexuality; it may have a threatening edginess, particularly for white viewers. The clear insinuation is that she intends her sexuality to be a political challenge endangering white power. (Emphasis mine)

Sex is power, ladies. Let’s stop letting the Patriarchal voices in our society – whether they come from men or women – shame us into covering up or hiding our raw sexuality in hopes of being considered classy or good. Fuck that. Own it!

What They Ridicule And Suppress Makes You Powerful

The power structure in our culture – the patriarchal, materialistic, monotheistic thought-pattern that dominates everything – likes to ridicule, marginalize and “otherize.” For Beyonce, things that have been traditionally ridiculed or dis-approved include natural African hair and noses. Her lineage is a roadmap of oppression and discrimination – “Alabama Negro,” “Louisiana Creole,”  cornbread and collard greens… the Southern, country, Black culture in this country is not looked upon favorably (to say the least) by the “powers that be.” 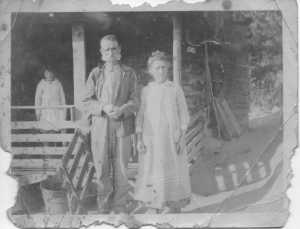 Some of my own Appalachian Ancestors

Those of us who come from this kind of upbringing (mine is poor, white, southern Appalachian – a different kind of southern country that may not be persecuted but that’s no less ridiculed) could easily be made to feel shame for our roots. We’re not the Puritanical WASP-y stock that’s supposed to be the pinnacle of goodness and respectability. Something else I’ve learned is that the things that cause us shame are also keys to our power.

Shadow work – delving into the parts of your subconscious that create all the patterns in your life and learning to embrace the things you think are aversions – will make you whole. It will liberate your mind in such a powerful way that you become unstoppable. For me, there’s been a lot of reliving of childhood scars, a lot of time spent accepting the shadow that is afraid to be loved and be powerful because of them. Letting her have her way until she’s comfortable enough to let go of the blockages.

Beyonce is clearly way ahead of me on this. She brings up every single thing in her lineage that could be a strike and brandishes it like polished gold. And it makes me want to do the same – to get several hands full of red clay dirt and channel the Granny Women conjurers in my own lineage. To remember how to use the accent I was laughed at for when we first moved out of the mountains. To embrace the tough, mean, don’t-fuck-with-me spirit that comes from my grandma’s line.

The Facebook group for the magic course I’m in had a great discussion of this, and several people brought up Aphrodite. But others have suggested she was channeling Mami Wata, the African Goddess of water and sex. And Bey’s dress is the best evidence of this – red and white are the colors traditionally worn by Mami Wata’s followers. The Goddess is a double-edged sword (aren’t they all?). She can bless her devotees with great wealth and abundance, or suck people into the water to drown. So yeah… all of the imagery lends itself to Her.

Southern magic isn’t quite like what you’ll get from Wicca. There’s no “Rede” or “Rule of 3” saying that anything negative you send out will come back on you three times stronger. Marie Laveau was known as much for her curses as for her healing. Appalachian Granny Women were under no such restrictions, either. Nor were the Irish Witches they descended from.

And of course all of these traditions focus an awful lot on prosperity. Which seems to be a bit uncomfortable to a lot of Pagans today. One of the major criticisms I’ve seen, even by people who “get” the magic of Formation has been over the blatant celebration of extreme wealth. “I’m so reckless when I rock my Givenchy dress.”

But this wealth is exactly what Mami Wata wants for Her followers. And Beyonce tells us exactly how she got here – she worked damn hard for it. And she’s also telling us how to get there, too: “I see it, I want it. I stunt, yellow-bone it. I work hard, I grind till I own it.”

Slay. All day. She doesn’t sit around and rely on her music for her income. According to Forbes:

But Beyoncé doesn’t stop with music — she’s built a small business empire. She earns millions endorsing companies like H&M and Pepsi. She has a line of fragrances with names like Heat, Rise and Pulse, and then there’s her clothing company House of Dereon, which features jeans, shoes and accessories. All together we estimate that Beyoncé earned $115 million between June 1, 2013 and June 1, 2014.

Yes, she has a talent few have. She’s had some lucky breaks (and I’m wondering now if there was some Conjure behind some of them?), but luck comes to those who work for it.

I left the “k” off of that word on purpose, by the way.

But here are just a few of the magical moments from this video:

There’s more, I’m sure of it. There are so many layers to this song and video it could take a million views to catch them all. But for now, I got some grinding to do.