Today, Deborah Maynard became the first Wiccan in Iowa history to deliver the morning invocation at the State House. And of course the conservative Christians have gone apeshit over it.

According to local news coverage:

“It was kind of a rush,” said Maynard, 43, a project manager for a company she declined to identify. “It was awe-inspiring. It was humbling. A little scary to be the first one to do something like that in the state of Iowa and the third one in the nation.”

“I just wanted to show that the House is very inclusive of all faith traditions,” she said.

But is the House inclusive? Fully one third of lawmakers boycotted Maynard’s prayer. One, Rep. Rob Taylor showed up but “peacefully protested” by turning his back to Maynard and silently offering his own prayer in opposition to hers.

Taylor told media he’d asked himself, “What would Jesus do?” if He were in the same situation, and decided Jesus wouldn’t boycott. Jesus would “passively protest” and then seek out the offending sinner later and try to convert her. Taylor did ask Maynard out to coffee later to “talk further” – presumably with Taylor doing all the talking.

No word on whether Maynard took him up on the offer. 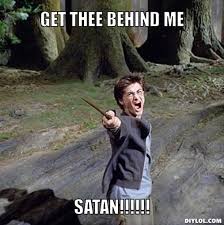 Taylor did admit that surprisingly, he didn’t hear anything offensive in the prayer. Swarms of demons didn’t appear and posses all the legislators. Nobody spat pea soup like Linda Blair. He also admitted he had never turned his back on Jewish or Islamic prayers when offered in the State House.

Speaking as a former member of Taylor’s philosophy, I wouldn’t expect him to turn his back on Jewish prayers. Christians see Jews (today anyway – obviously its been different in the past) as sort of spiritual older brothers. Lost other brothers, of course. They still need to accept Jesus as their Messiah, but at least they’d be praying to the same God and wouldn’t be seen as offensive.

Muslim prayers, on the other hand, I’m somewhat surprised about. The right-wingers I know are just as incensed about them, constantly looking for examples of attempts to enact Sharia Law here in America. Because we can only have a theocracy if it’s based on a conservative interpretation of the Bible.

Meanwhile, up in the balcony there were non-elected-representatives who showed up to “pray against” Maynard’s prayer. Pastor Michael Demastus of the Fort Des Moines Church of Christ told the same media outlet linked above:

He was joined by Michelle Gute, a Huxley resident who said she came to the Capitol to counteract the Wiccan message with a Christian prayer.

“I don’t want any demonic influences on the people who are making decisions on our behalf. I was not praying with her,” she said. “I was praying the opposite. Our country was founded on godly principles, not goddesses and whoever she was praying to.”

Don’t bother telling Gute that this country actually wasn’t founded on Christianity. It’s part of her religion and she’ll never accept it. 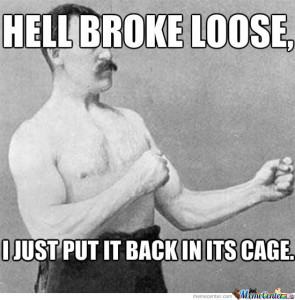 Bob Vander Plaats of The Family Leader, a conservative Christian organization said Maynard offering the prayer was a “stunning development (that) many Christians across the state recognize has spiritual ramification.”

He threw in a Bible verse from Ephesians, which was of course intended to be final proof that Maynard’s prayer was nothing short of Satanic: “For we do not wrestle against flesh and blood, but against the rulers, against the authorities, against the cosmic powers over this present darkness, against the spiritual forces of evil in the heavenly places.”

Oh. Yeah. That totally proves it.

Vander Plaats also offered a counter-prayer just like Demastus and Gute. No doubt this is the only reason the anticipated swarms of demons were diverted and the janitors escaped pea-soup-cleanup detail. If the demons had been dispatched already, but were thwarted by the counter-prayers, I wonder where they wound up? My best guess is they went next door to a gay wedding in Indiana catered by a pizza company. After all, they were probably already on the guest list.

Pointing Out The Obvious Hypocricy

“In a way it troubles me in that we all should be respectful of people’s traditions and beliefs,” she said. And then she delivered a zinger: “It is disingenuous for some legislators and conservative religious groups to create a public outcry against a minority religion when they often cry wolf about their own religious rights being under assault.”

BOOYAH. If that quote doesn’t just sum everything up perfectly, I don’t know what does. “We demand religious freedom! We demand not to be persecuted for our beliefs! We demand the right to pray anywhere, any time!”

“But only WE get that right!”

Yup. That’s the Christian Right in a nutshell.

Warning: Continue Reading At Your Own Risk

Here is the blasphemous, demon-attracting prayer in its entirety. The holy rollers aren’t here to pray against it, so you’ve been warned. If the swarm of demons shows up because you read this, it’s not my fault. I will not clean up the pea soup when you spew it. Are we clear?

Say 3 Hail Mary’s, cross yourself repeatedly, and hold a Bible between yourself and your computer screen before you read this:

“We call this morning to god, goddess, universe, that which is greater than ourselves to be with us here today. By the earth that is in our bones and centers us, may all here remember our roots and those we are here to represent. By the fire that gives us light and passion, may all here remain passionate about the work that must be done for the people of Iowa. By the air that gives us breath and logic, may all here find thoughtful solutions to the problems that are presented. By the water that flows through our blood and stirs our emotions, may all here draw an emotional intelligence which helps us see the inherent worth and dignity of every person. We call this morning to spirit ever present, to help us respect the interdependent web of all existence of which we are a part. Be with us and this legislative body and guide them to seek justice, equity and compassion in the work that is before them today. Blessed be, Aho and Amen.”

Wait… that’s it? She didn’t mention Satan once! She didn’t call for sacrificing babies or drinking blood! What kind of Wiccan is this chick? Clearly she’s just pretending to be nice and normal… it can’t possibly be that Wicca is actually just a nature-based faith that celebrates things like the elements and trees and the moon and sky… No. Of course not!

I guess we’re all just doomed.