Home » My Pagan Path » The Healing Waters of Creeks and Streams

So it was a rough weekend. My last post mentioned how I was in Western NC for a memorial service, and how anxious I was about seeing my dad again.

The day came. He decided to skip the memorial and only show up at the cemetery, “so he wouldn’t make anyone uncomfortable.” When my aunt and I arrived there, we saw him by the grave mingling with the few people who’d gotten there before us.

And as soon as we got out of the car, he quietly made his way in the opposite direction and left.

The grandstanding martyr. Drove over 5 hours and put on dress clothes just to stage a walkout. Everyone feel sorry for the poor ostracized guy, who just can’t figure why BOTH his daughter and sister refuse to have contact with him.

Such a typical abuser, making it all about him. 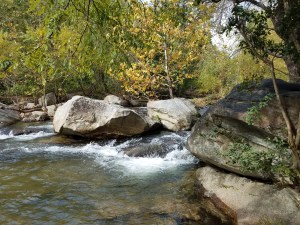 Anyway, after it was all over my nerves were frayed to say the least. But we are talking about fall in the Appalachian Mountains, even if this is one of the least spectacular leaf seasons in recent memory. (They can’t all be brilliant.)

I drove around alone for a bit, and found a park with a water walk by a creek that was just what I needed. Had it not already been too cold I’d have taken off my boots and waded in the water.

A few minutes beside a stream can calm the most persistent anxiety, at least for a while.

There is some scientific backing for this. According to the book Blue Mind: The Surprising Science That Shows How Being Near, In, On, or Under Water Can Make You Happier, Healthier, More Connected, and Better at What You Do, being near water is healing, and can help you reach a state of mindfulness meditation.

But it’s always been intuitive for me. 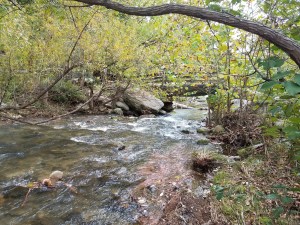 Whenever I’m in need of calming, this is the ritual I do at a stream or creek – any body of moving water will do. First, I bring some kind of offering. Usually a stick of incense as it leaves no trace (the wooden stick at the bottom being biodegradable.) Don’t leave anything that makes a mess or leaves trash.

First, I honor the spirit of the stream and the spirits of the place. I sit quietly with them for a while, just listening. Listening to the sound of the stream, the birds, any other wildlife. Even the sound of the wind. I try to connect with this spot in this time so I’m not just another human tromping along, taking energy from the place and leaving nothing other than occasional trash.

Speaking of trash, if you see any, clean it up. The spirits really appreciate that. 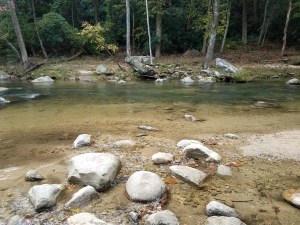 Sometimes I’ll “hear” communications from the stream or the trees. For me, this isn’t an audible voice but just a series of impressions in my mind. Not just imagination, as they clearly seem to come from outside of myself. Many of these have been quite profound. But often, they’re just a sense of calm. A sort of knowing that time is much greater than I give it credit for, and what seems big in my right-now is but a tiny speck of dust in the grand cycle of things.

I breathe all this in. I breathe deeply, inhaling the spirit and beauty around me, and exhaling my troubles and concerns.

I imagine a taproot growing from the bottom of my spine down into the earth. It plunges deep into the darkness, sending out shoots into the cold dark soil. That darkness is where life and creativity comes from. From that root I begin to draw up energy.

Inhale the energy, exhale the tension. I imagine a surge of golden-white energy coming up my root, making its way further up my body with every inhale. On every exhale, I let go of the tension and relax the muscles in my body more and more.

The tension and worries and anxiety flow out with my breath, and are taken away by the water, carried downstream and dissipated. 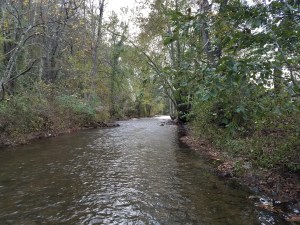 The golden-white light fills my body, exits the top of my head and swirls around me like a shield, eventually going back down into the earth that it came from. Sometimes the energy raised is so palpably strong that I go into a bit deeper of a trance state and speak in tongues just like back in the Pentecostal church.

I do this until I feel better. Usually I leave with a deep sense of calm and happiness.

But always remember to show appreciation to the stream and the spirits for their help and for the shared connection. Just don’t say “thank you,” as the Good Folk tend to get offended by that. Appreciate them as equals, not someone who did a service for someone above them.

I was able to do this ritual twice this weekend, once right after the ceremony in my hometown, and once as I stopped at Chimney Rock state park on the way home. It doesn’t provide long-term healing (although I’ve yet to do it every day for an extended time, I don’t think it will take the place of therapy for ultimate healing) but it’s better than Xanax in the short term. And trust me, I made use of both this weekend. 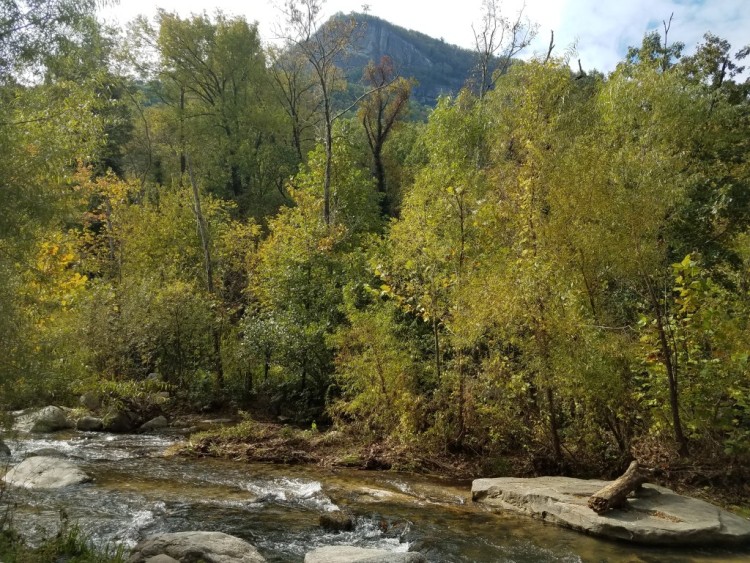 What works for you when dealing with anxiety and difficult situations relating to your trauma?

One thought on “The Healing Waters of Creeks and Streams”