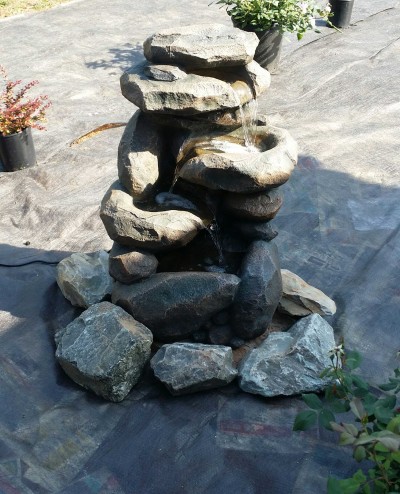 It can get a bit tricky to practice Pagan rituals when you are not fully “out of the broom closet” to your family. My kids (both teens who somewhat know what I’m into now) are the only ones here for the most part as the hubs (still a fundamentalist Christian with no idea) works overseas and is here twice a year on vacation. At that age the kids kinda do their own thing, but it’s still hard to dance around a Beltane fire when your 14 year old keeps wandering out asking if you can roast hot dogs. (We did – and it was still a very powerful night.)

I’ve done fire rituals in the backyard so far, it’s surrounded by a privacy fence so that works well. But it’s also home to the family dogs, who think people outside = people throwing balls for them to chase. Or at least being petted. Certainly not staying outside of an invisible circle and allowing the person in the center to concentrate on any type of meditation.

So my moon rituals have mostly been done either locked in my bedroom or in my front yard. Right in front of my front porch is an area that I used to plant with flowers every year, that would look really nice in May and the first half of June. Then it would get hot and I’d lose interest in weeding. For the last several years it’s gone completely fallow, taken over by centipede grass, assorted weeds, and some totally overgrown and spreading lantana bushes. But this little spot has some history. Several years ago after a major heartbreak, I spent days planting and cultivating this area. And even then it worked magic, healing my wounds day by day. Nature has always been able to heal my soul. 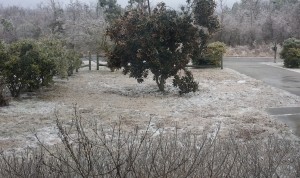 The “Before” pic, taken during an ice storm this winter.

This same spot is where I felt the familiar energy I used to feel at the Pentecostal altar. It’s where I sat when I finally made it back outside after my Achilles tendon injury a couple months ago. I’ve been wanting to replant it for a while, but it was so overgrown it just seemed like too big a job for me, especially with the injury.

A friend of mine happens to own a tiller and was willing to let me borrow it. Between her boyfriend and my brother in law, we got the whole 450-square-foot area tilled up and the soil amended with a truckload of manure. I’ve covered it with a layer of newspaper under landscape fabric. I’m going to cover that with several inches of mulch. Weeds are NOT going to be an issue for this year at least. Now I’m collecting knockout roses (not the ubiquitous reddish ones! Pale pink ones thank you very much – at least the flowers won’t be totally cliched) to plant. Low maintenance.

I’ve always wanted a fountain there, but could never find one that looked right that wasn’t several hundred dollars. This week, though, I struck gold in Lowe’s: a 30″ tall one that looks reasonably like real rocks, with 3 different streams cascading down into pool areas for the birds to play in. It was PERFECT. And while not cheap, not ridiculous either. I snatched it up and hurried home.

The work in progress… arranging roses for planting, leaving a space in front of the fountain for meditation.

So now I have tilled Earth, and a dozen or so plants still in pots ready to be planted. The tree behind it is home to several bird feeders and a birdbath, so there is lots of wildlife. I set up the fountain in the center of it all, adding (sort of) rocks and more importantly running water. That’s when the magic happened.

It was sunset. I stood in the front of the yard where I could see both the reddening sky and the sinking sun and my new flowing water. And the energy began to rise. I could feel Spirit – whether it’s the genius loci or perhaps Aine (the Celtic Deity I’ve been closest to so far) or the Earth itself… I don’t know yet. But one thing undeniably hit me like a ton of bricks: this is meant to be my power spot. I am going to have some amazing rituals here.

At the moment it’s still a work in progress. I’m thinking of some slate-like rocks in the area in front of the fountain, spreading out beside the sidewalk and in front of the porch. It won’t be obvious but they’ll be for me to sit and meditate on, and to put candles on, or crystals or burning herbs…… the possibilities are endless.

I have a hard time meditating on a daily basis. But I never miss my morning coffee. So now I think I can combine the two, having my coffee in my new sacred spot and starting each day breathing in Nature. I’m really excited to see what this new space does for my practice!

I’ll keep you posted as it nears completion.